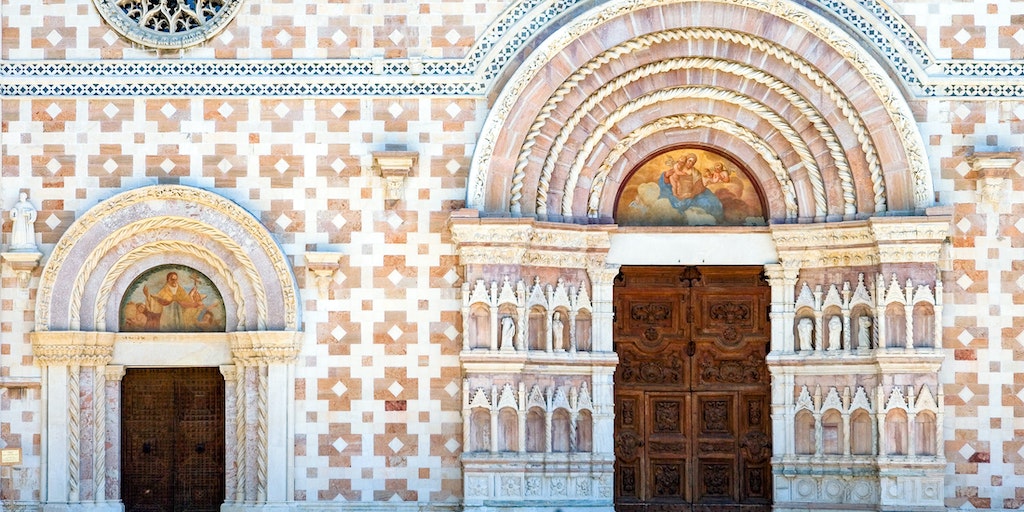 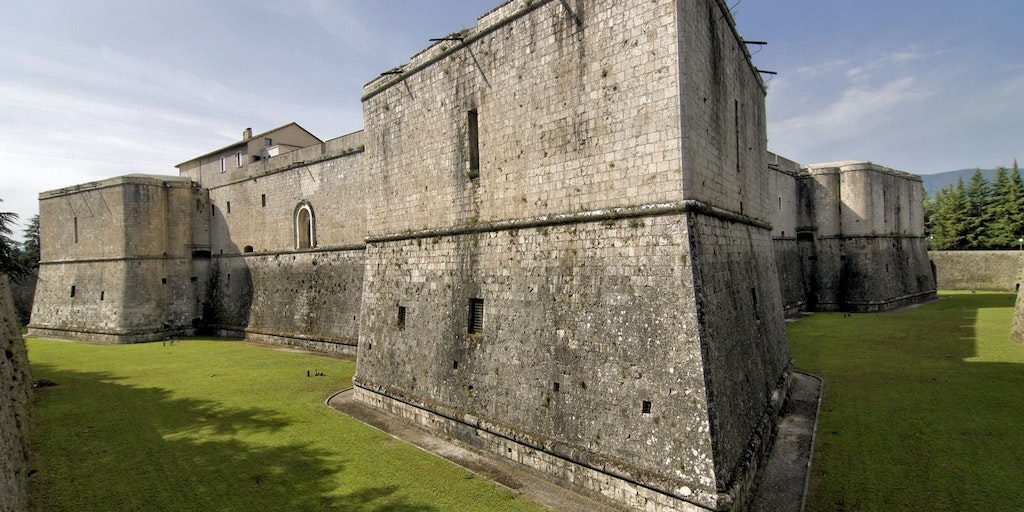 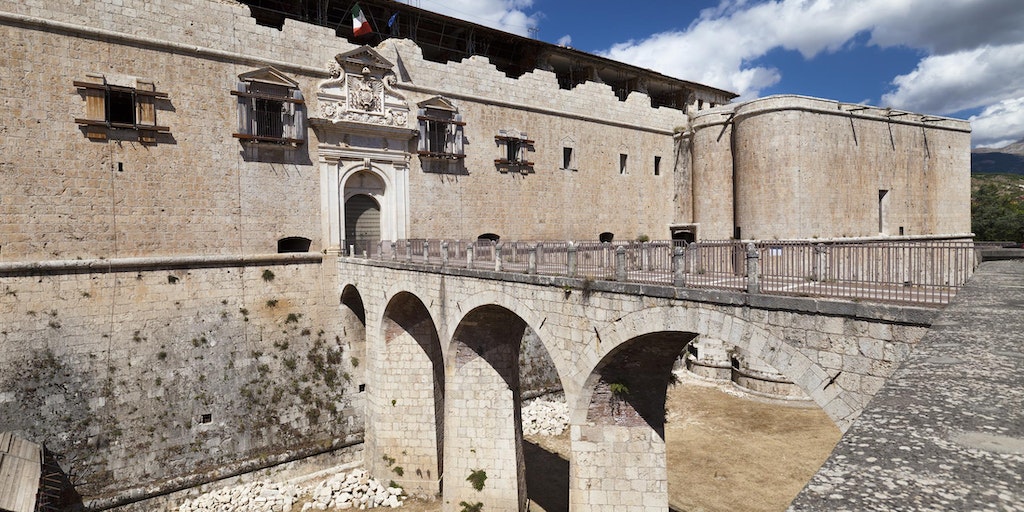 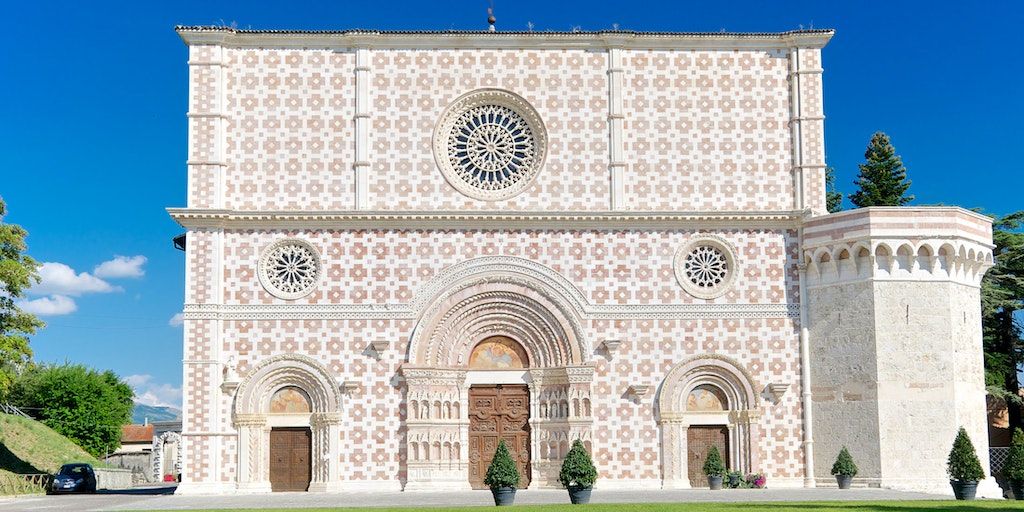 Discover l'Aquila located between not less than four nature reserves flanked by the Apennine mountains with peaks that reach over 2000 m. The town is rich in history and cultural events.

The city is most known by its powerful earthquake, that struck L'Aquila and the surrounding area in the night of April 6, 2009. We know there was serious damage in L'Aquila's historic center. Lots of monuments have been destroyed, ruins remain today. Years will pass by before l'Aquila again stands up and the lovely atmosphere will revive.

L'Aquila is the capital of the Abruzzo region and is located in the northwestern part of the region near the border with Lazio. The city is quite overlooked among tourists as it often stands in the shadow of Rome as the region's trademark. The town is worth a visit as it is very rich in historical sights.

In order to understand many of the city's attractions to the fullest, it is important to know something of the city's history. Emperor Frederick II (1194 - 1250), who was emperor of the Roman Empire from 1220 - 1250, founded the city in 1240. When the city was founded he gathered people from not less than 99 villages, which meant that the city had 99 churches, 99 squares and an ordinary well 99 taps (Fontana delle 99 cannelle). Much of the churches and plazas have been destroyed by earthquakes, but the well with the 99 taps still stands intact. The town obtained its independence, when Italy was assembled in 1861 and before that it had suffered many losses. One of the defeats that have helped to make its mark on the city, was the city's uprising against Spanish rule in the 1500s. The inhabitants were as punished to build the fort and prison - Forte Spagnolo - as we today can visit.

In recent times, the city is characterized by the many young students who come from afar, to study at the city's Conservatory and higher education. Therefore, there is a rich café, restaurant and shop presence, especially around the cathedral square Piazza del Duomo and the main street Vittorio Emmanuele. Cultural experiences are available in the city such as theater, jazz and classical concerts.

During a visit to the city, there are three sites you should not let pass by: the well site Fontana delle 99 cannelle, the fortress Forte Spagnolo and Basilica di Santa Maria di Collemaggio.

Fontana delle 99 cannelle, which was commissioned by the city government in 1272 is located in the western part of the city and is an ordinary well, since it has no less than 99 taps. The well is shaped like a small space. On the three sides of the space is a wall in white and red stones, where many taps are designed as fabulous animals, faces. Despite earthquakes and other disturbances, the water that has run out of the taps since the well was built, which is a bit of a mystery. The well has therefore become a symbol of its ability to survive and for inhabitants unity. The water was previously clean drinking water, but no you can not drink it anymore.

In 1520 L'Aquila made residents revolt against Spanish rule, which since the early 1500s had ruled southern Italy. The revolt was put down with a firm hand, and as punishment was inhabitants were set to build Forte Spagnolo. The punishment should not be forgotten, says above the entrance door "ad reprimendam Aquilanorum audaciam" ( "which reprimanded for aquilanernes cheek"). The fort houses the Museo Nazionale d'Abruzzo (Abruzzo National Museum), one of curiosity is the skeleton of a giant mammoth, found in the area in 1950. From the fort you have beautiful view over the city.

Basilica di Santa Maria di Collemaggio, built in 1277 just outside the city. It has a stunning red and white stone façade with three rose windows and was built at the request of Pietro Angeleri (later Pope Celestino V), He has lived for years as caveman in Majella National Park. Inside the church there is the Pope's beautiful Renaissance tomb. The church also has a Porta Santa (Holy Door), which is the only one outside the Vatican. The largest religious event in the church is La Perdonanza, which takes place every year between 28 and 29 August. The event aimes for pilgrims and other believers, going in and out the door for 24 hours, by which they all hope for absolution.

L'Aquila is located near the Gran Sasso National Park, so a visit to the city can easily be combined with a day trip to the park.