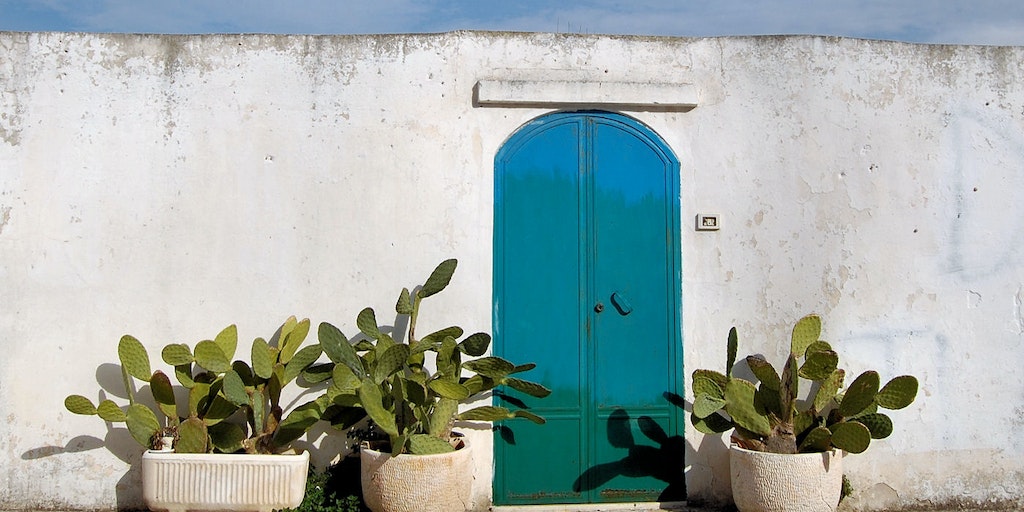 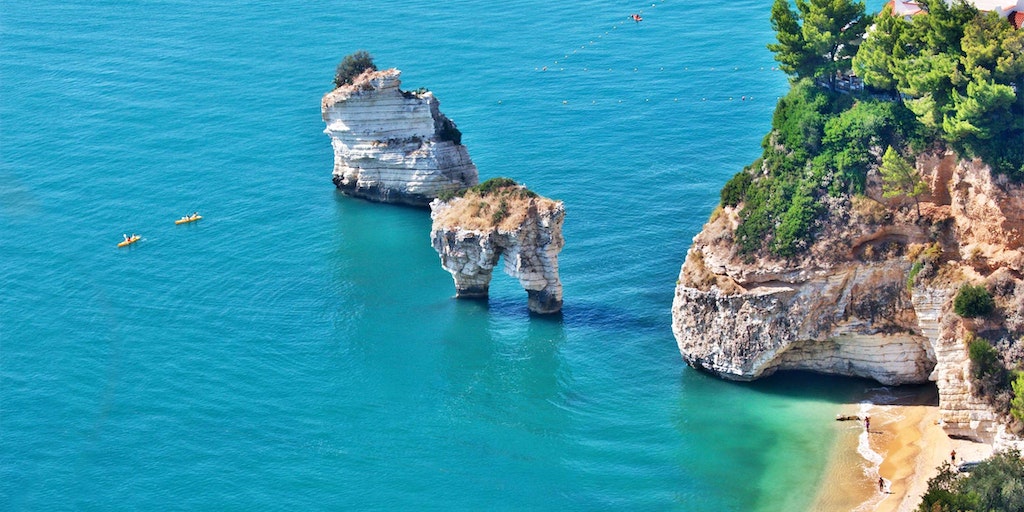 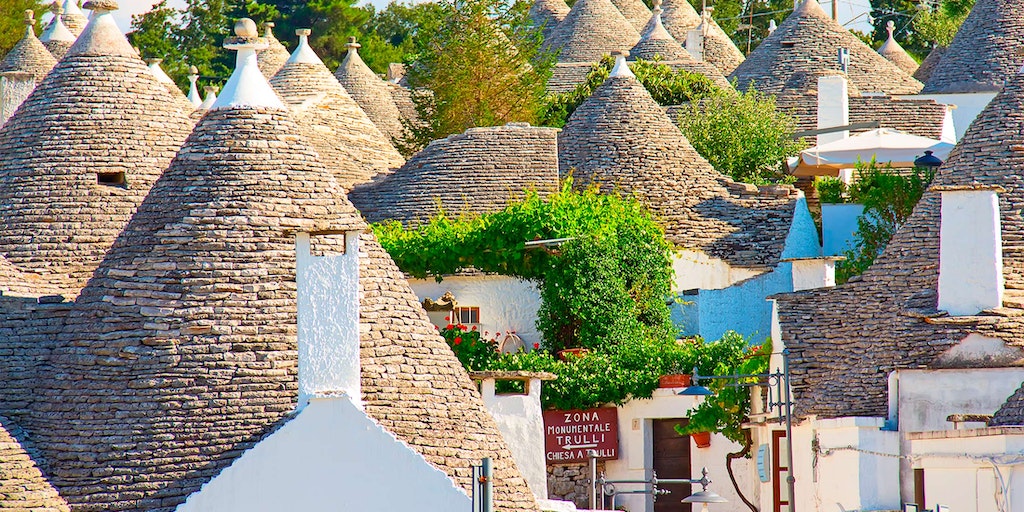 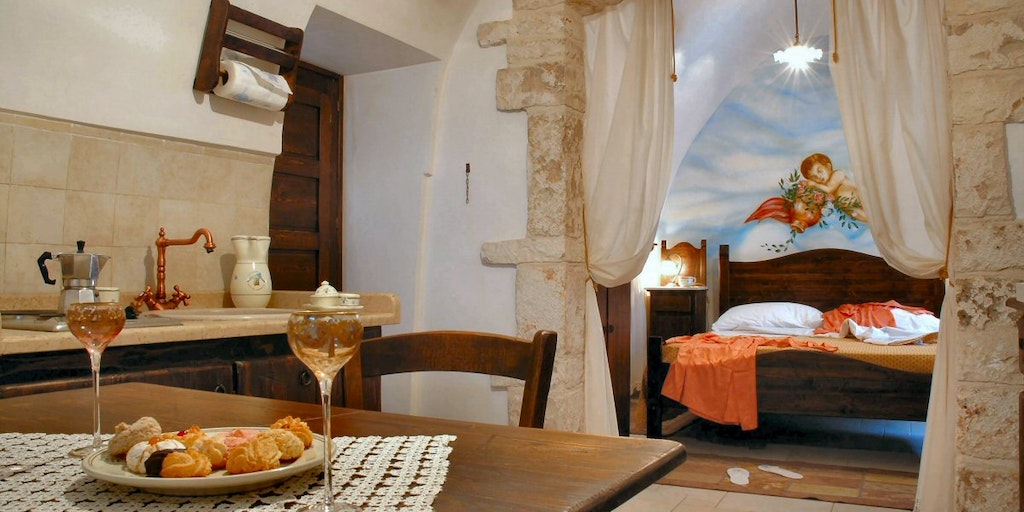 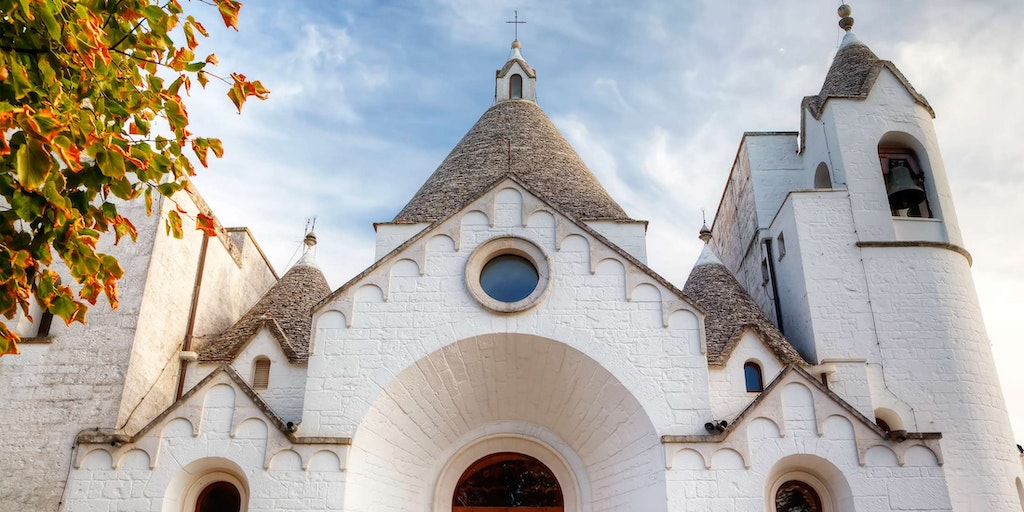 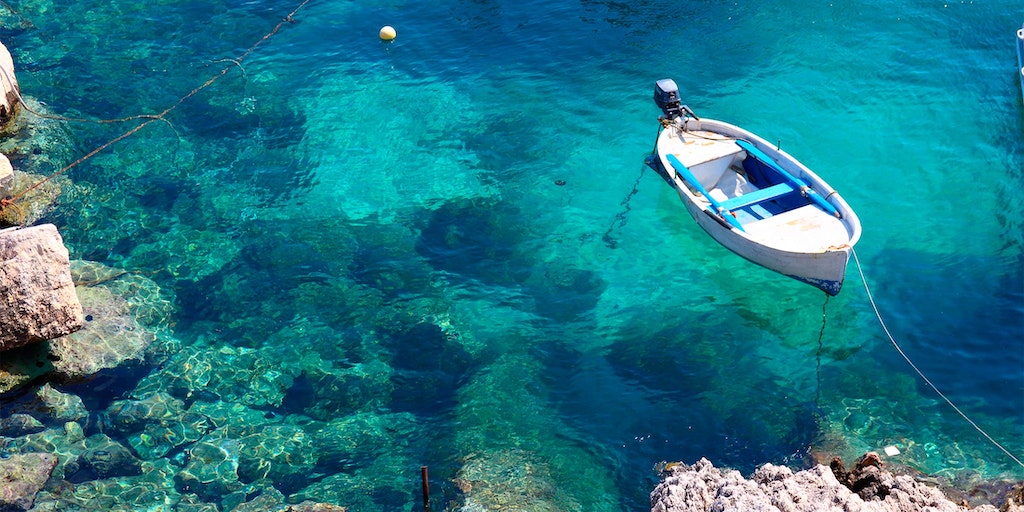 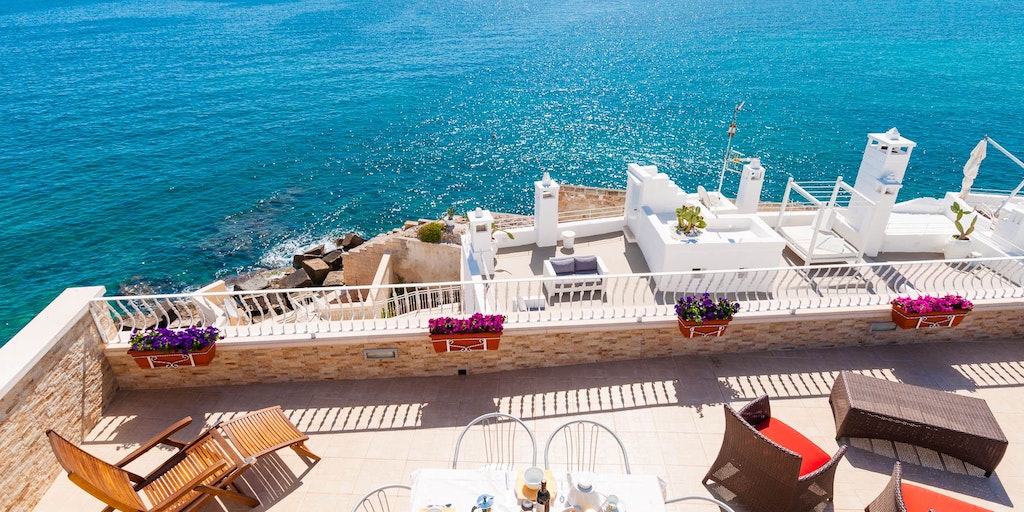 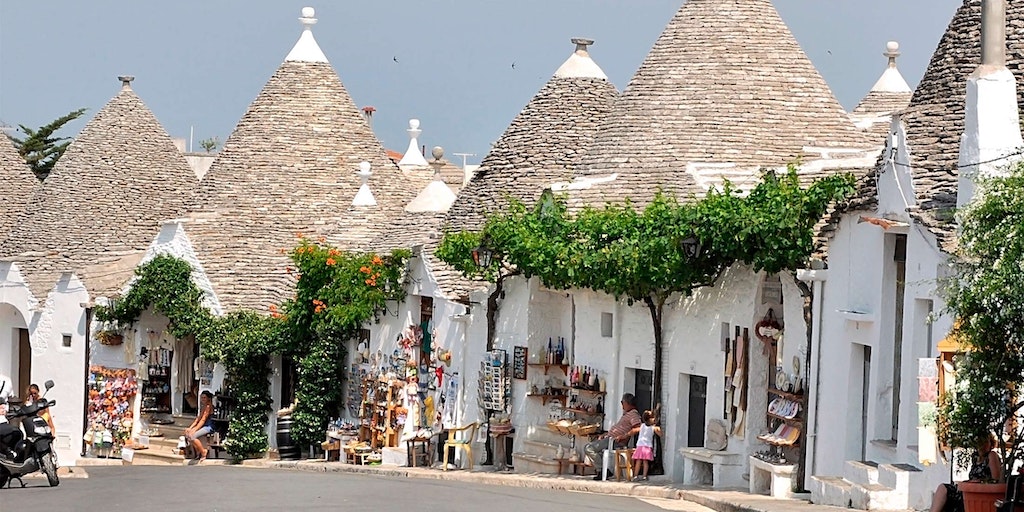 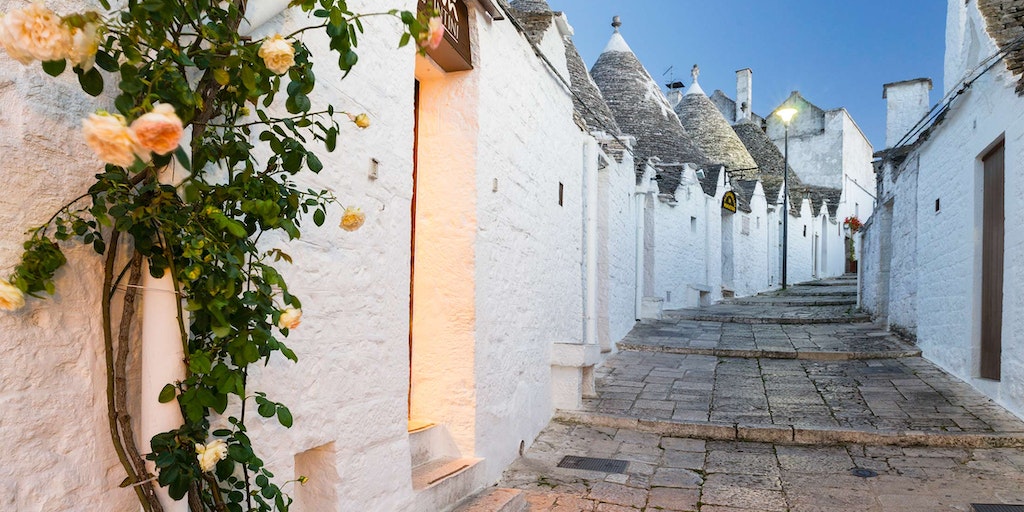 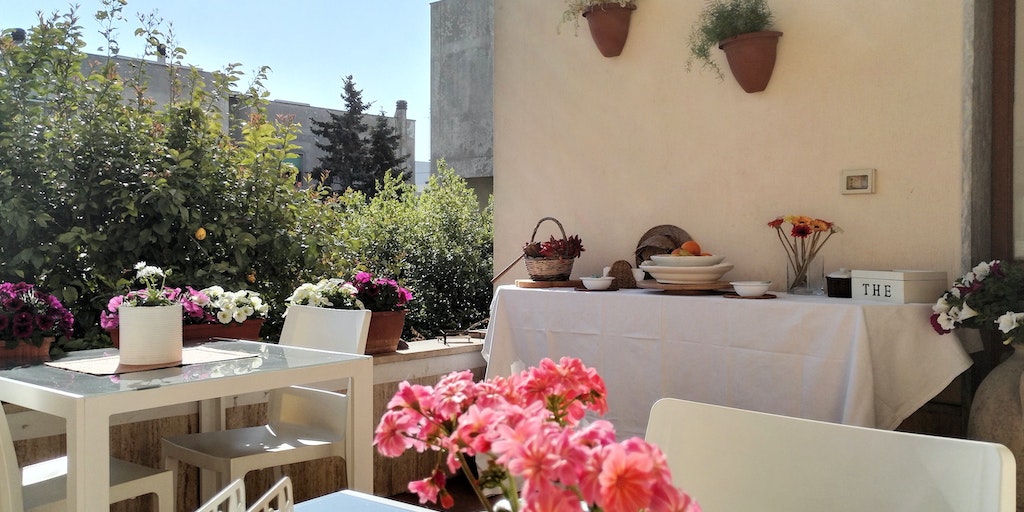 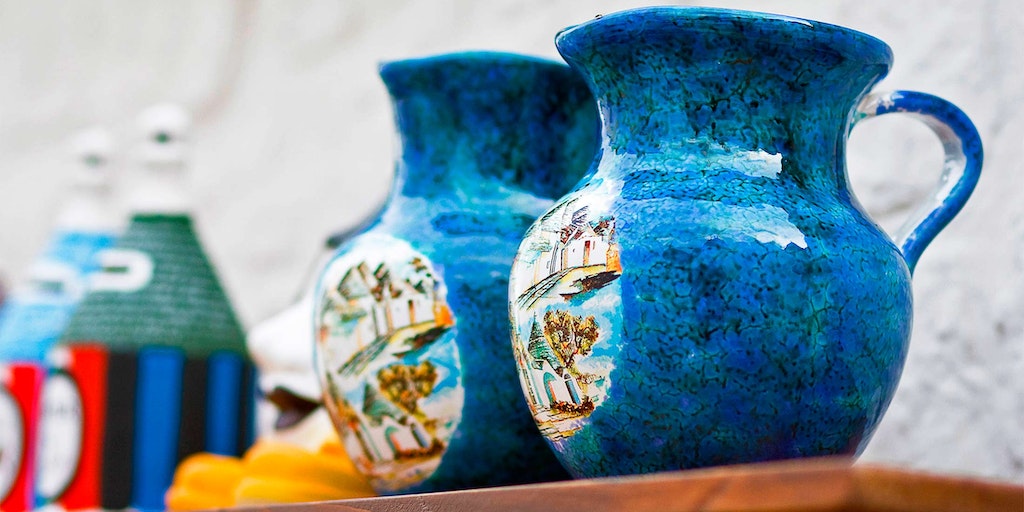 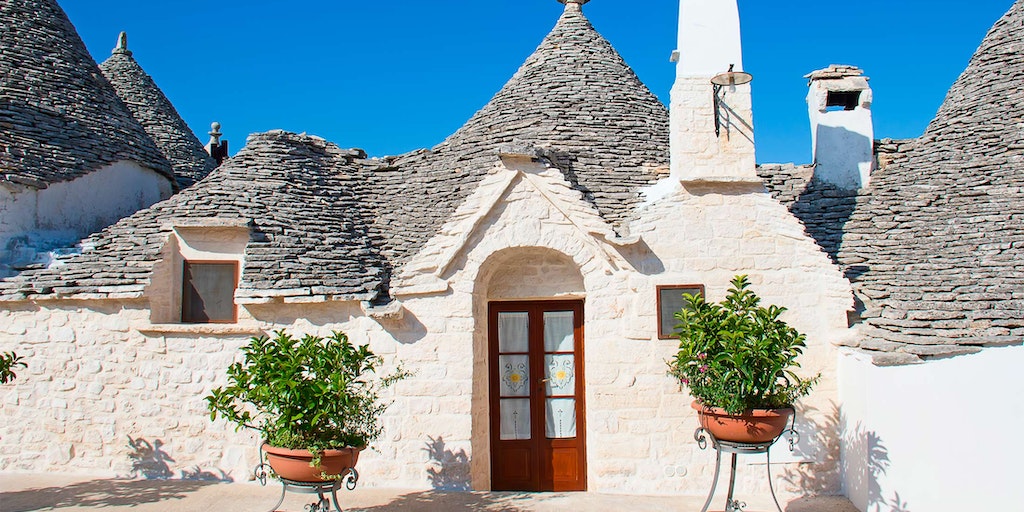 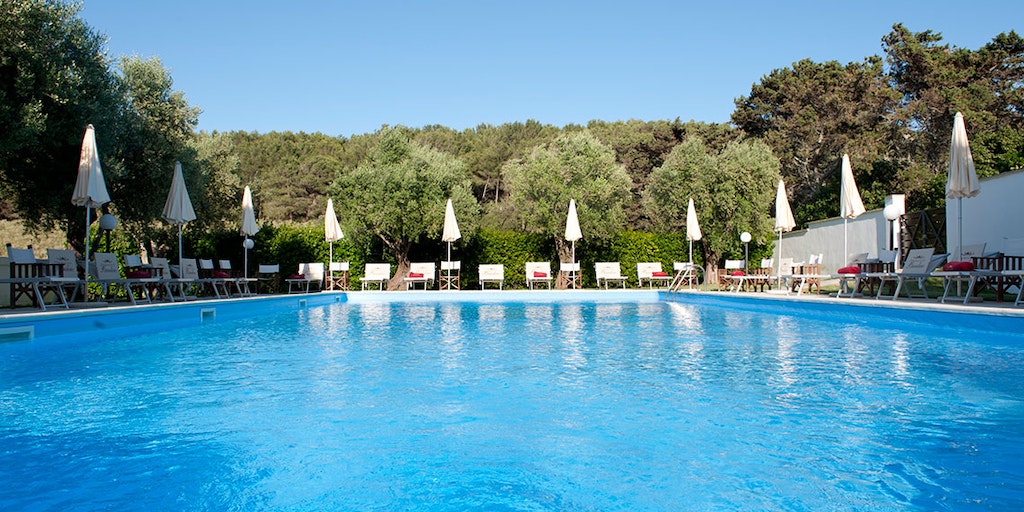 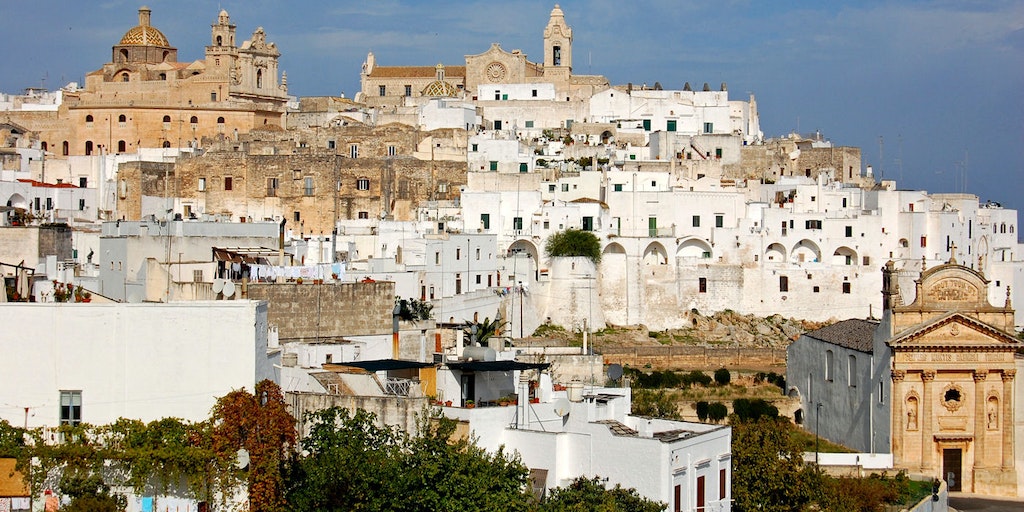 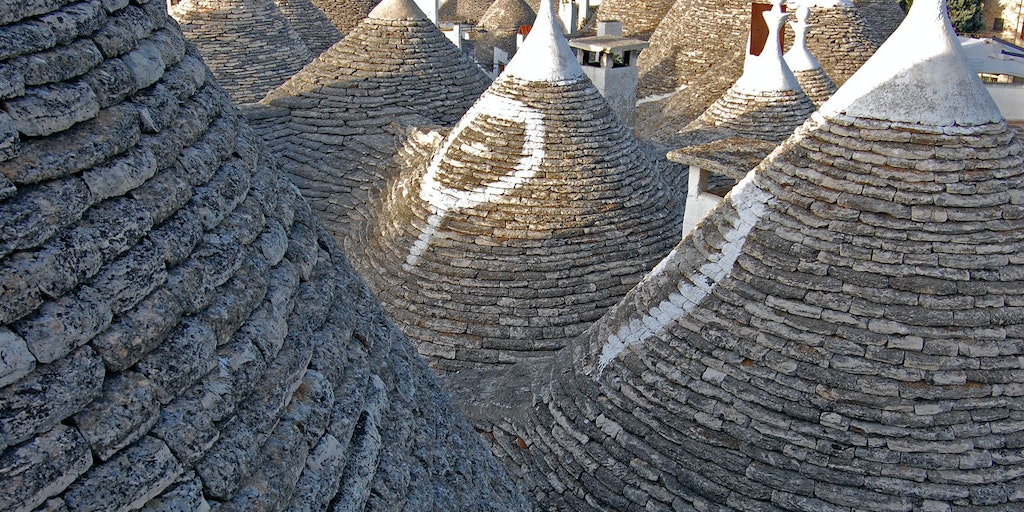 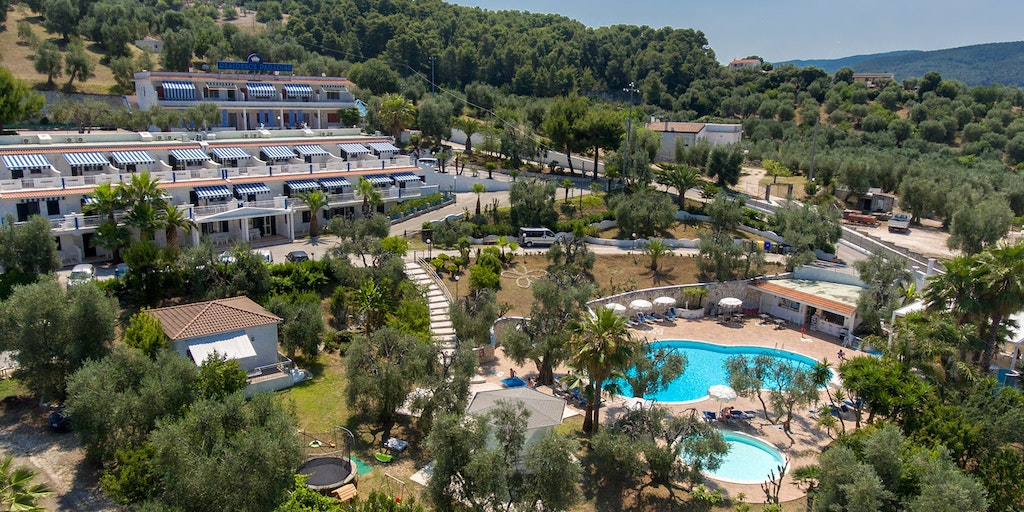 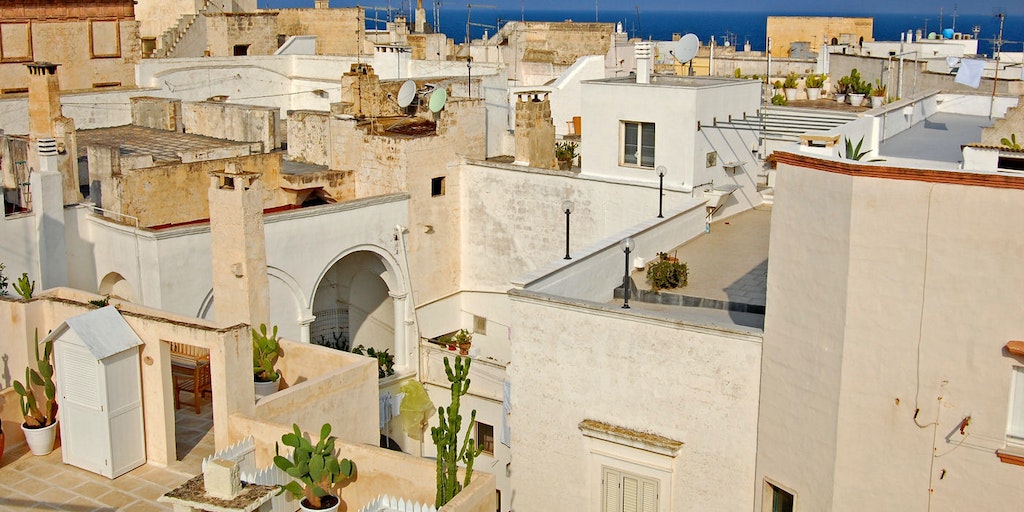 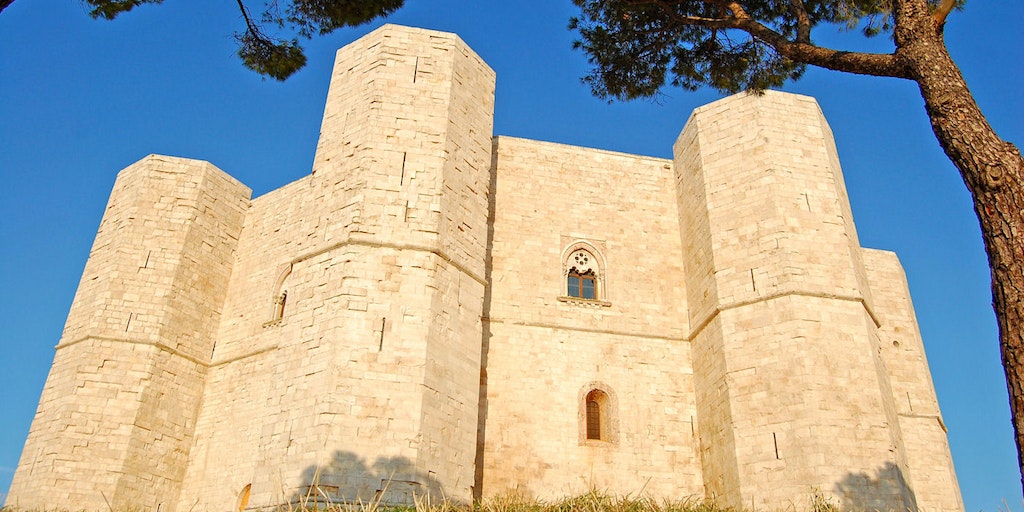 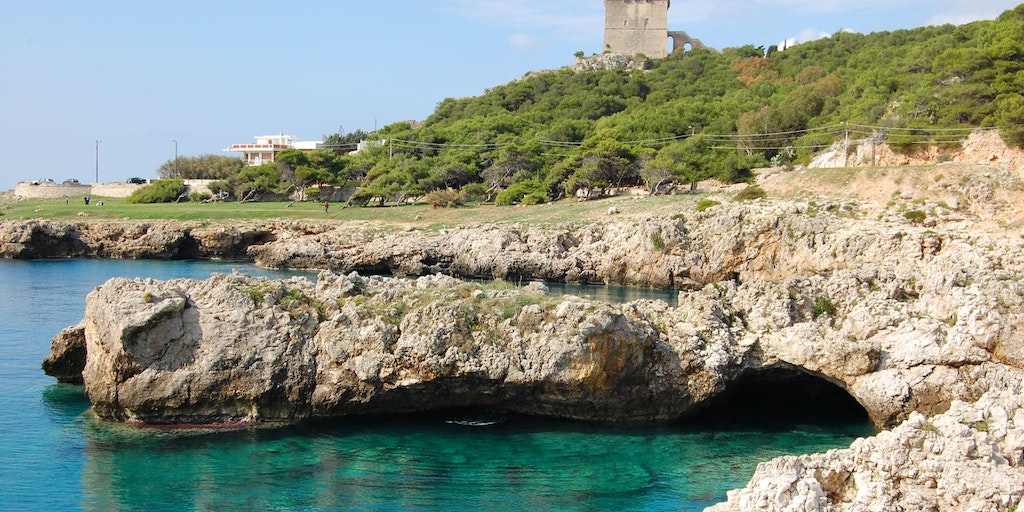 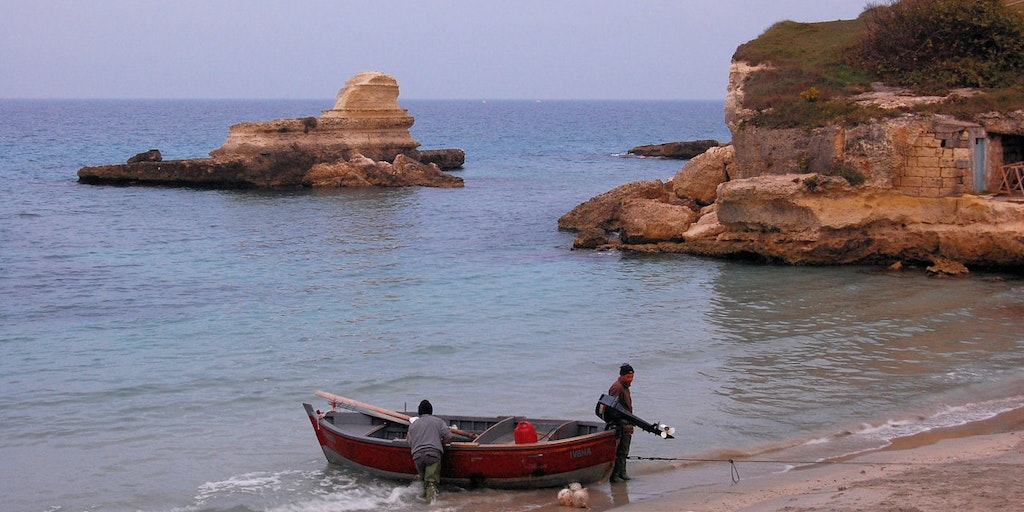 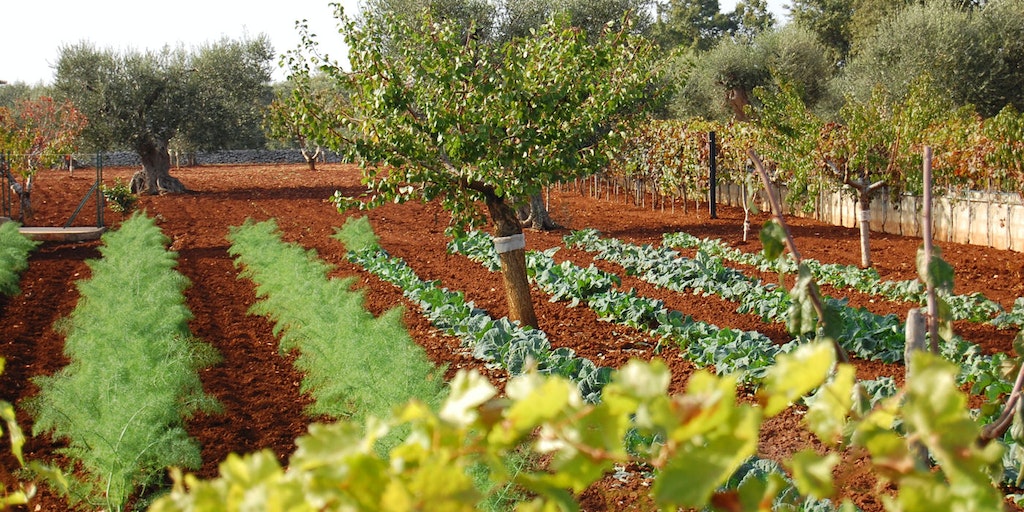 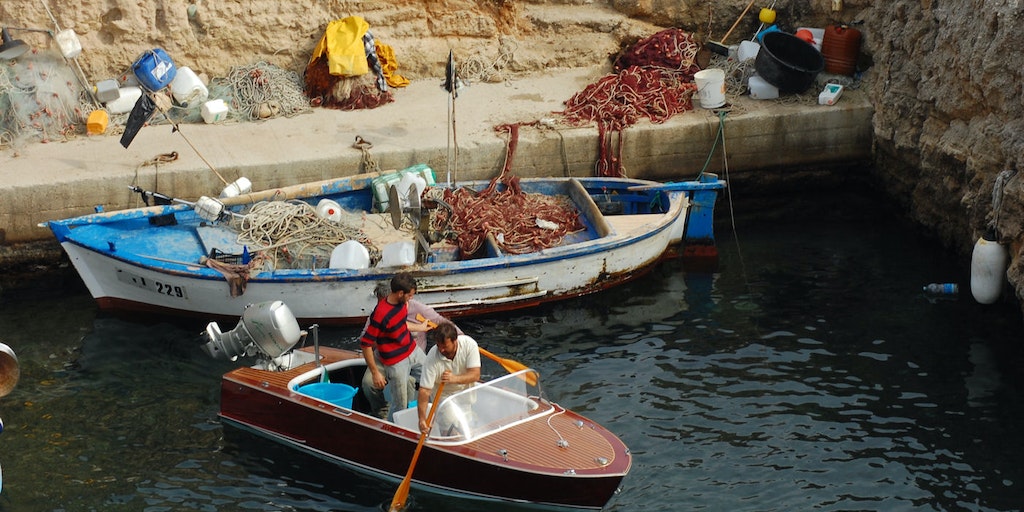 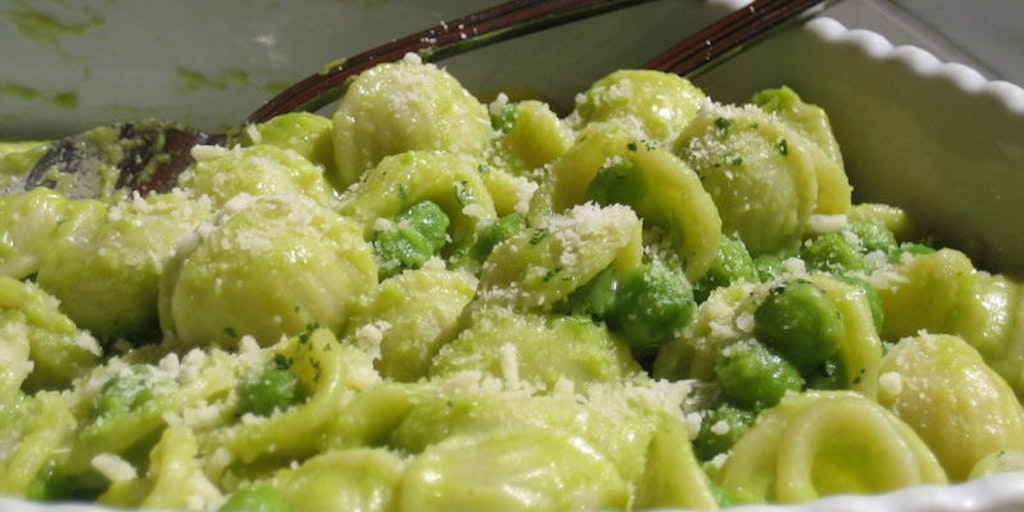 Holiday in Apulia - a gem in Southern Italy

Welcome to the Apulia - the heel of the boot of Italy! Book your holiday accommodation in Apulia and be prepared for endless beauty, marvellous beaches in all shapes and sizes, & enchanting and authentic villages brimming with character and history.

Most popular areas in Apulia

See all cities and destinations in Apulia

Nature is not shy to present itself in its finest form, and the Gargano National Park with the delightful Tremiti Islands is the gem of this region in that sense.

Apulia is one of the most exotic Italian regions and this is largely because different cultures such as Greeks, Romans, Lombards, Arabs, Byzantines, Normans, the French, Spaniards - even Austrians - has prevailed here! You will see that the many cultures have left their mark on the landscape, food and architecture. Apulia is an invaluable treasure of churches, castles, large manor houses and other great buildings.

The Salento peninsula in the southern part of Apulia is a fascinating area with a wonderful dramatic coastline, beautiful sandy beaches that are reminiscent of the tropics, interesting villages and baroque towns such as Lecce. But also the beautiful landscape of the Itria Valley with the interesting and beautiful towns of Locorotondo, Alberobello, Fasano and Martina Franca that deserves a visit.

Apulia is largely covered in olive groves with up to 3000 years old olive trees, and the region accounts for nearly 50% of the total Italian production of olive oil. Apulia is also famous for its ancient stone walls and fascinating reddish-brown topsoil, enveloping the landscape. Finally, you will find some of Italy's most beautiful sandy beaches in Apulia

In our catalogue of handpicked accommodation in Apulia, you can find many place to stay in scenic locations in the region around the Gargano National Park with its limestone cliffs and sandy beaches, or in the Itriadalen area with diverse towns dotted around a spectacular landscape for example. At the same time as burning off a few calories and experiencing the beautiful nature, you can discover a rich and colourful history since the region has been ruled by the Greeks, Romans, Ottomans and Spaniards!

Choose from a long list of interesting towns in Apulia

You will have plenty of choice of interesting towns to visit in Apulia, for examples those with a rich history to satisfy your fascination with the past, this with a lively atmosphere to satisfy your need for fun, and those areas rich in nature to satisfy your need to appreciate the great outdoors. Bari is a city rich in monuments such as the Basilica of San Nicola, the Castello Svevo on the outskirts of town is a fort built under Frederick II, and San Gregorio church whose origins date back to the Byzantine period.

Visit Ostuni for its unique character and atmosphere. It is best known as the white city and here you will find a beautiful facade with a myriad of winding streets and white-washed buildings to explore. The town has several monuments including Chiesa delle Monacelle, the San Francesco church and the cathedral. Egnazia is an archaeological park with Roman ruins including the remains of an amphitheatre.
Alberobello is another unique town in Apulia which is characterized by special houses called Trullis. Through In-Italia it is possible to book a holiday in a Trulli.

Taranto was an important town during the Greek and Byzantine periods. It has many narrow and quaint streets. There are also a number of remains from the Greek period including the remains of a Doric temple to Poseidon. Lecce is one of Italy's impressive Baroque towns. It has many interesting sights including a Roman amphitheatre and many Baroque treasures such as the Santa Croce church and the cathedral.

Otranto is a town with a cathedral famous for its wonderful mosaics created in the 12th century. The mosaics depict various scenes including the Tree of Life and other biblical scenes. Gallipoli is a beautiful town in the southernmost part of Apulia. Its history dates back a long time and as the name indicates (Greek for beautiful town) the town was built during the region's Greek period.

The region has an impressive history. For a long time Apulia was occupied by the Greeks, who were later succeeded by the Romans. When the Roman Empire was divided into the West Roman and the East Roman Empire respectively, Apulia came under the East Roman domain, also known as the Byzantine Empire.

However, the Byzantine period was marred by a certain amount of turbulence partly because of the constant Lombard invasions. These were later superseded by the Norman princes including the famous Robert Guiscard.

The Normans overturned the Byzantine rule and appropriated not only Apulia but most of southern Italy including Sicily. After the Normans the German King and holy Roman Emperor Frederick II took possession of Apulia. Frederick has left several monuments in Apulia where he liked to go hunting.

Later Apulia was ruled by the Spanish and later still, it came under French rule until finally it became part of a united Italy.

Because of its location and shape, the nearest beach is never far away in Apulia. The coastline varies between vertical cliffs and sandy beaches with secret coves and rocky bays.

Many of the long white sandy beaches are located next to the Ionian coast south of Gallipoli, known as Italy's Maldivians, but also by the Apulian Adriatic coast in the Natural Park of Gargano and the Capitano at Monopoli with its wide sandy beaches.

Thus Apulia is able to satisfy every beachgoer's needs. Whether you want to swim or snorkel amongst the rocks in crystal clear water, or whether you want a good sandy beach, both wishes can be fulfilled during a holiday in Apulia.

Gargano in the northern part of the region is a large nature reserve offering impressive scenery with a rich and varied flora and fauna. Here you will find ancient towns, fine sandy beaches, high rugged cliffs, beautiful caves and picturesque coves. The popular town of Vieste is part of the Gargano peninsula and is a very attractive white-washed village.

Dauno is another nature reserve forming a kind of transition to the Apennines. Undulating countryside is a feature of this area, but in some places you find heights close to 1200 metres.

Taste the many flavours of Apulia

Obviously Apulian food is centred on the surrounding sea. You will often see fish and seafood like mussels and sea urchin on the menus. Oysters are also plentiful. Apulia was already known for its fine oysters during the time of the Roman Empire. Then as now there were several oyster farms in the region.

Fish and seafood: Squid, and especially eel from Lesina, are often served in Apulia. Eel is cooked in many different ways with one of the favourite methods of preparation being eel soup.

Cheese: Caciocavallo Podolico del Gargano is one of the best cheeses in Apulia. It is made from cow's milk and has a pleasant aroma of herbs and vanilla. Pecorino is also made in Apulia. It is a sheep's cheese which in this area is called Canestrato.

Sweets: In the way of sweet things you often encounter dried fruit and small marzipan figures.

Wine and vineyards in Apulia
Many have no doubt heard of the Primitivo wines that are related to the perhaps better-known Californian Zinfandel. The Primitivo grape has become very successful in the northern hemisphere primarily because of its concentrated fruit and berry taste. Unfortunately the good ones are not always widely available.

But as in so many other places in Italy, a positive development is also taking place in Apulia towards better wines. Below is a list of some of the best vineyards in the region.

If you take a tour of the region, try to notice how the use of garlic changes from being used in the north to quietly becoming used less and disappearing completely in Gallipoli, where onions are used instead.

Sweets? Yes, of course there are many of them in Apulia, and they are usually very sweet, there is a fascinating relationship between the sweets in southern Italy and in the Near East. But why try the more "sophisticated" desserts when the fruit itself is so bursting full of sweetness and sunshine? Try just a very simple, rustic plum, and look for dried figs with almond in the "belly" and sprinkled with cocoa.

All these good things must of course be washed down, and here you have the opportunity to drink some of the regions wines. The development of wines over recent decades from this region has been explosive. Do yourself a favour and try a wine from such Accademia dei Racemi, Cantina Due Palme, Castello Monaci or Cosimo Taurino, and you will discover why Puglia is one of Italy's emerging wine regions.

Rating 4,2 of 5
Very good
Based on 53 reviews
See customer reviews

The best tiramisu is in Pompi and for dining there's lots of great restaurants.
Regarding excursions Ostuni, Alberobello, Trulli, Polignano Amar... e, Trani, Castellammare Del Monte are recommendable, and lots of other places.
The parking can be problematic, and can be very difficult in the high season!Read more

Make sure you have enough time for your stay. Enjoy the area, the people, the food, the city, the country, the water and of course the wine. Everythin... g is just so lovely and worth the money.

It's absolutely an advantage with a car.Read more

Cosy old-city with many cafe's and restaurants.

View all reviews of Apulia