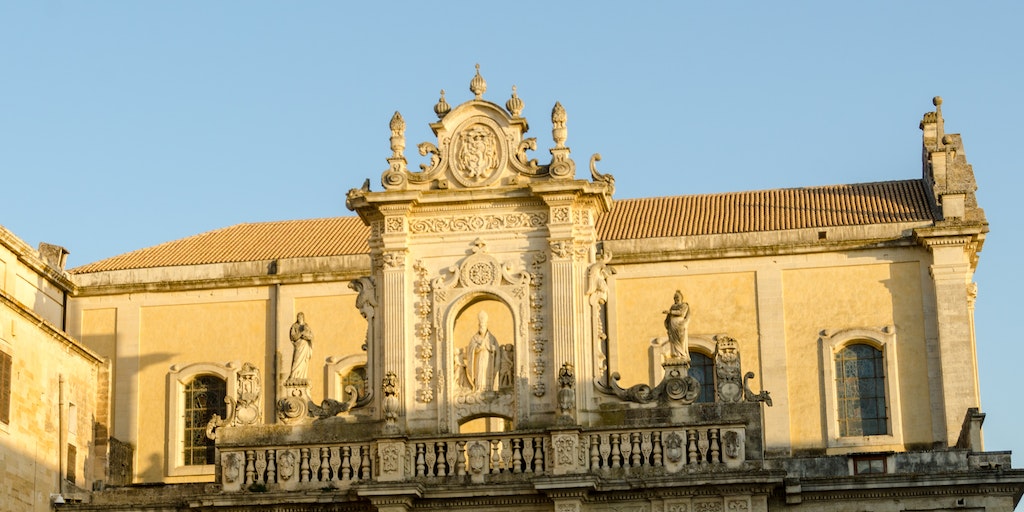 Loading content
Lecce, with its 90,000 inhabitants, is the historical and financial main city of the Salentine peninsular. The town is especially characterised by its financial and artistic glory days between the 16th to the 18th centuries, which gave it the nicknames “The Florence of the Baroque” and “Athens of Apulia”.

Lecce, with its 90,000 inhabitants, is the historical and financial main city of the Salentine peninsular. The town is especially characterised by its financial and artistic glory days between the 16th to the 18th centuries, which gave it the nicknames “The Florence of the Baroque” and “Athens of Apulia”.

This was the site of the Messapic town of Sybar, which for a long time resisted the advances of Rome. However, in 3 BC the town fell and was renamed Lupiae. The Roman centre emerged about 3 km away under the name Licea and was connected to Rome via an extension of the Via Traiana from Brindisi. Lecce flourished during Roman times and the town had its own harbour (Porto Adriano, now San Cataldo), which was only second in importance to Brindisi.

During the Byzantine-Gothic war Lecce suffered heavy losses and in 549 it was plundered by the Goths under Totila. This was followed by five centuries of Byzantine rule, where the entire town was overshadowed by Otranto, the most important harbour in Italy during Byzantine times. With the arrival of the Normans, and the defeat of the Byzantines, Otranto’s significance weakened and Lecce experienced once again a period of growth. The Norman counts had their court in Lecce, which became the most important town of the region once more.

The tumult of the following centuries left Lecce relatively untouched and it remained a wealthy and significant town both under the rule of the Angevins as well as during Aragon rule. From the middle of the 15th century Lecce was the centre for flourishing business and the town experienced once more a period of amazing cultural wealth: literary people, painters, philosophers, scientists and other cultural people flocked here.

From 1500 to 1700 Lecce was threatened by Muslim invasions on many occasions and Carlos V equipped the town with new town walls and a fortress. It was also during this time that the town developed its special style – the distinctive barocco leccese.

Il barocco leccese
The numerous Baroque decorations in Lecce are not essentially that different from their Roman counterparts, but there is a tendency that Baroque in Lecce is mainly a feature of the decorations while in other places it also influences the ground plan.

A special characteristic of Lecce’s Baroque sculptures is that they are all made in the local light stone pietra leccese. This is a stone which is soft and easy to sculpt, but having been exposed to the wind and weather it hardens and gains a beautiful golden colour. It is precisely the softness of the stone that creates such great possibilities. In the 16th century when Lecce experienced a veritable invasion of monastic orders – including Jesuit and Franciscan - many fantastic and impressive buildings were erected. During the same period, many older churches and mansions had a makeover and adopted the new architectural fashions, and as it was a period of economic growth, the results created were impressive. But despite the versatility of the local stone, it has also proved to be vulnerable to the pollution produced the city’s numerous cars.

Lecce cannot be described as a small town but its wealth of sights are mainly concentrated in a small area in the old town.

Palazzo del Seggio
This was built in 1592 as a home for the local administration until 1851. Naturally it is rich in Baroque style but also has Gothic windows.

The Amphitheatre
This has only been partially excavated but it was large and could seat 25,000 people with an arena of 53 m x 34 m and a total area of 102 m x 83 m. The theatre probably dates back to the first half of the 2nd century.

The Roman theatre
Lecce had more than the one large amphitheatre. It also had a smaller version from around the same time as the first. In 1929 this smaller amphitheatre was discovered. It is a well-preserved theatre with room for an audience of 5000.

The cathedral Santa Maria Assunta
Built in 1114 but extensively changed in 1659-70 so that today it appears in full Baroque glory.

Santa Croce
This three aisled basilica church was started in 1549 although it was first completed well into the next century. The church is notable as a typical and bombastic example of Baroque Lecce: fabled animals, twisted bodies, plants, chubby angels and similar abound.

SS. Nicola e Cataldo
This is unusually for Lecce a church which is not Baroque – or not too Baroque. The last ruling Norman in Apulia, Tancred Hauteville Count of Lecce had this church built in 1180. The facade was transformed following Baroque principles in 1716 but luckily the marvellous original portal has been retained. This is a beautiful example of Norman masonry with lots of Muslim inspiration and a large rose window.