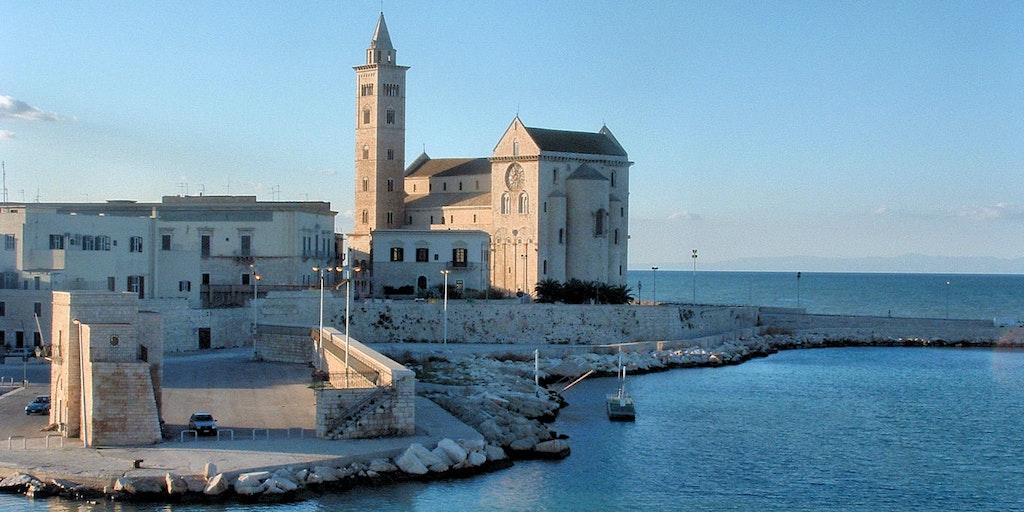 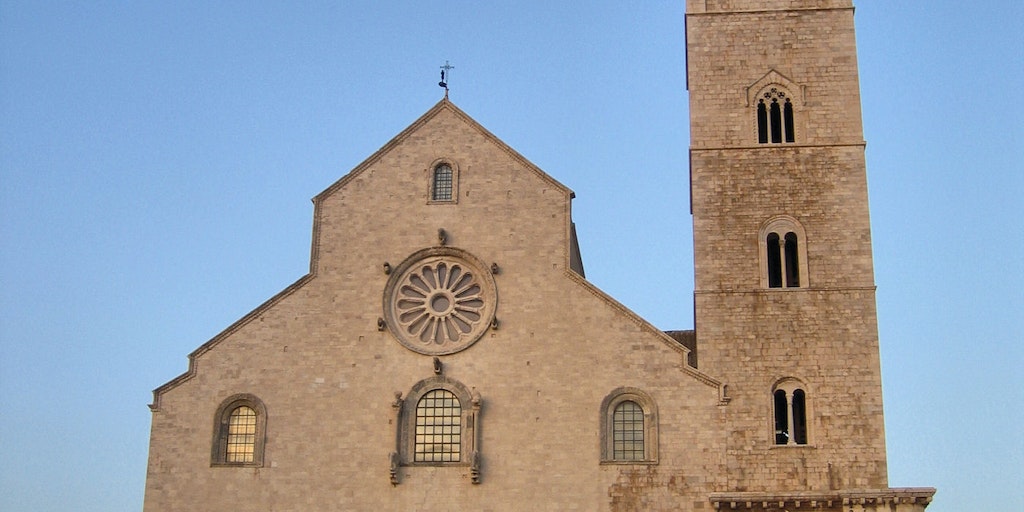 Loading content
Trani is a great place to spend a day or two. It has a picturesque fishing harbour and a sophisticated centre. In one of the small restaurants along the harbour front you can enjoy fresh fish caught locally or you can spend time visiting the town’s medieval churches. The town also has many fabulous clothes shops. And if you fancy a swim, the town is renowned for its good beaches.

Legend has it that the town was founded by Tirenus, son of Diomedes, and was called Tirenum or Turenum in Roman times. However, there is no evidence that the town dates back further than the 3rd or 4th century AD and the few finds there are from Roman times are probably from the nearby Canosa which was destroyed by the Saracens in the 9th century. Following the fall of Canosa, Trani was for a short time capital city of the area and home to the bishop. During Byzantine rule Trani maximised its position and was an important trading post with the Orient. Trani had a strong Byzantine presence and close links to Byzans, so that the town was one of the permanent Byzantine strongholds in the battles against the Normans. The first maritime law of the Middle Ages, Ordinamenti Maris, was drawn up in Trani in 1063.

During the time of Frederik II, Trani rivalled Bari in both trade and religious affairs. The town had permanent trading connections with Venice, Frederik built a large castle here, the town’s role as port to the Holy Land was great and even the Templar Knights had a hospital in the town.

The arrival of the Anjous meant decline for Trani and although the town experienced a renaissance in the 1400s, the battles between the Spaniards and the French led to permanent decline for Trani. The town was besieged several times and internal power struggles increased the crisis. Under the Spaniards the town lost its significance as a harbour town. In the 1600s the town became a university town and like Altamura participated eagerly in the Parthenopean Republic – although it was more the bourgeois that supported the republic while the people were against. A siege by the French ended with the town being burnt down and plundered.

There are many buildings of interest in Trani, such as Palazzo Cacetta in Via Ognisanti, which is one of the few examples of 15th century Gothic building in Puglia. Close to this mansion is the church of the Templar Knights, Chiesa di Ognisanti, which was built in the first half of the 12th century in the courtyard of the Knights’ hospital. Sadly, the church is most often closed.

However, the most noteworthy attraction in Trani is the cathedral, San Nicola the Pilgrim. This is one of Puglia’s most beautiful and unique Romanesque churches and the most magnificent reminder of medieval Trani. It has a wonderful location by the harbour. The cathedral was started in 1097 above the older church Santa Maria, but work on the cathedral was slow going and it was not finished until the middle of the 13th century. The church has suffered from 19th century embellishments but has since been restored to its original, elegant and stylish appearance. Saint Nicola the Pilgrim came on a pilgrimage from Greece and collapsed with exhaustion following his journey in front of Santa Maria on the 20th May 1094. He died some days later in the hospital of the Knights Templar. In 1096 he was canonised by Urban II and proclaimed patron saint of Trani.

The cathedral’s large bronze doors weigh over 2½ tonnes and were created by Barisano da Trani who also made one of the doors for the cathedral Monreale outside Palermo. The door is made of oak and covered by 32 bronze reliefs with both religious and profane motives. Note the relief of Saint Nicola in front of whose feet you find Barisano himself.

Another treasure is the cathedral’s bell tower built in the 13th and 14th centuries. And the church is packed with magnificent sculptures and paintings.

If you go down into the crypt, which is dedicated to Saint Nicola and dates back to the start of the 12th century, you find a simple and clean room with 28 marble columns crowned by beautifully carved and especially varied capitals. From the crypt there is access to the lower church, Santa Maria della Scala where the ceiling is lower (3½ m). The church is decorated with art from the 14th century.

Traces have been found of an even older church, the original Santa Maria, under this lower church. These traces include sarcophaguses and fragments of mosaics from the Lombard era. You can also climb down to Ipogeo di San Leucio, which is 1½ metres further down and is the resting place of the holy bishop’s remains. This room was created from the original church and the walls have sparse fragments of frescoes from various periods.