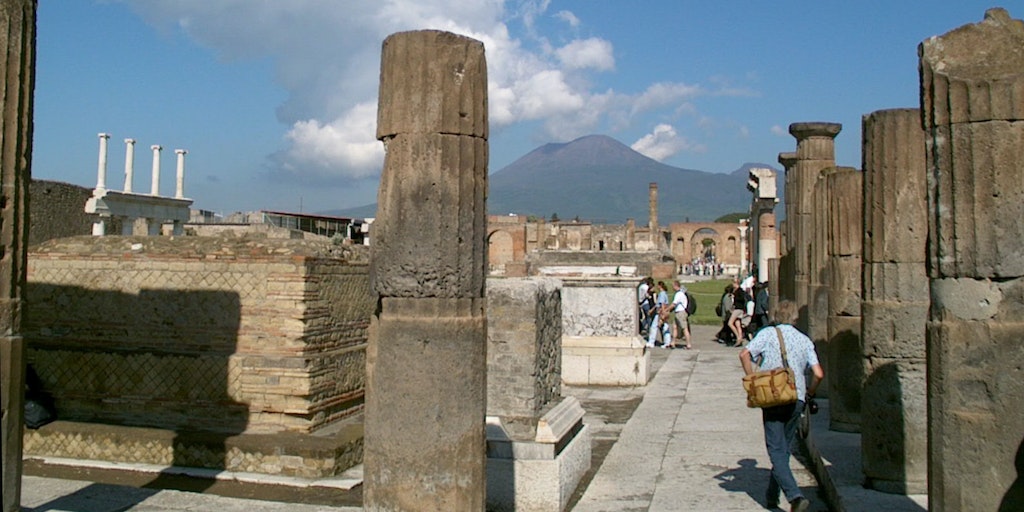 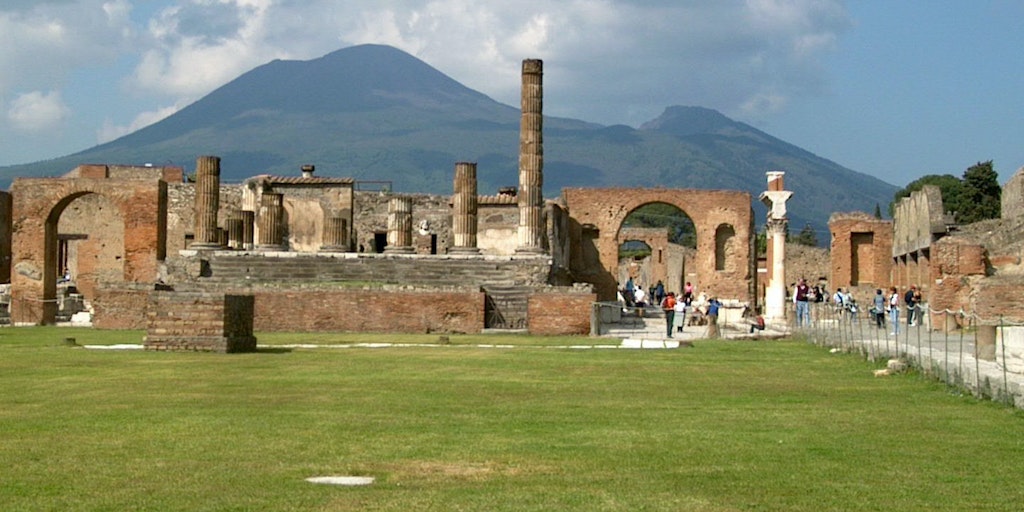 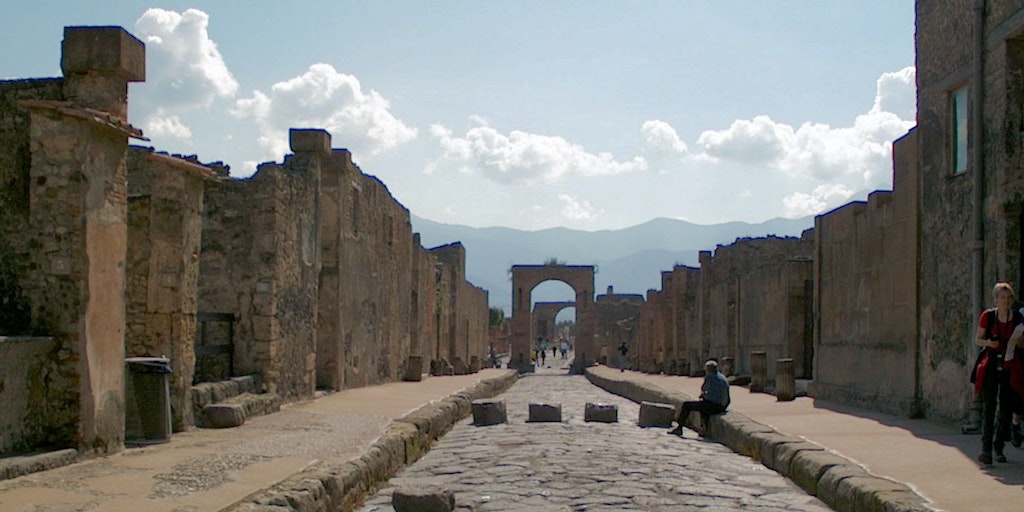 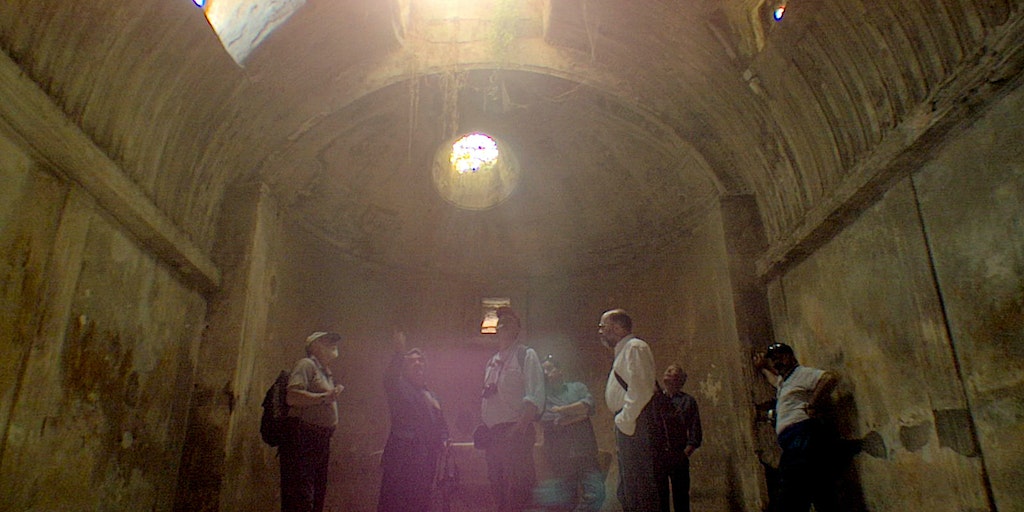 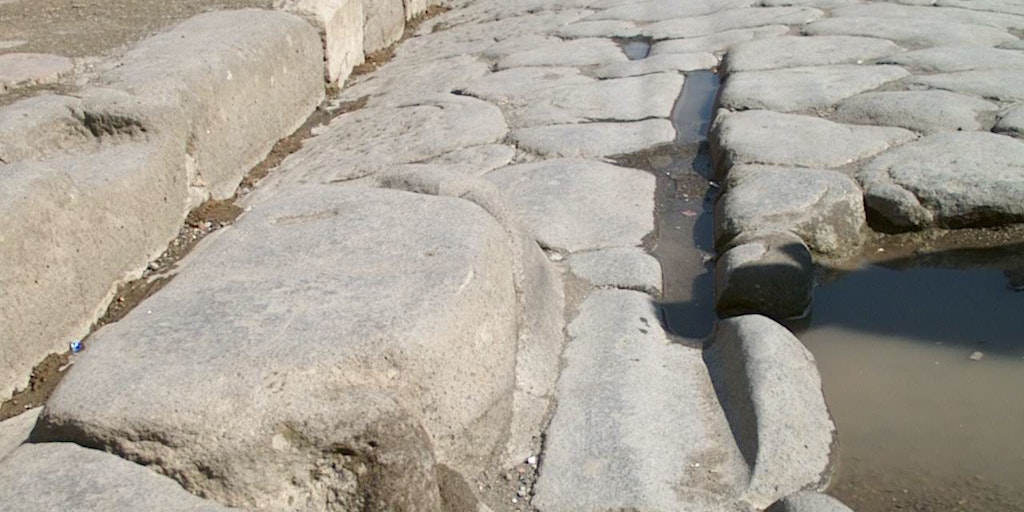 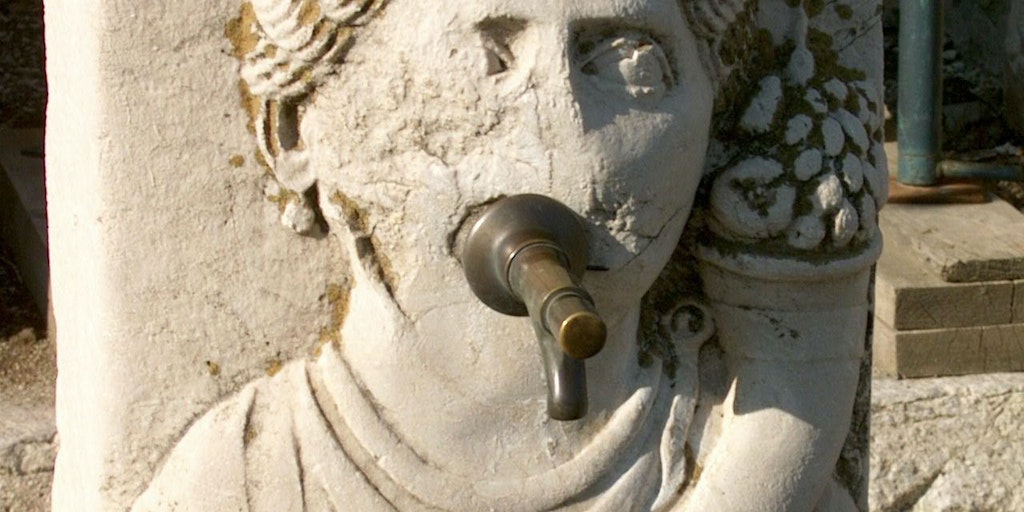 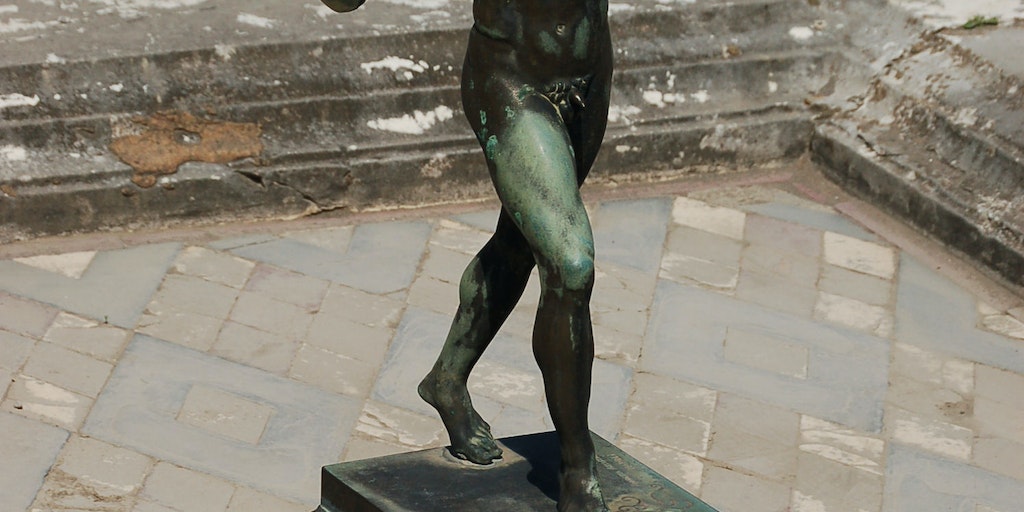 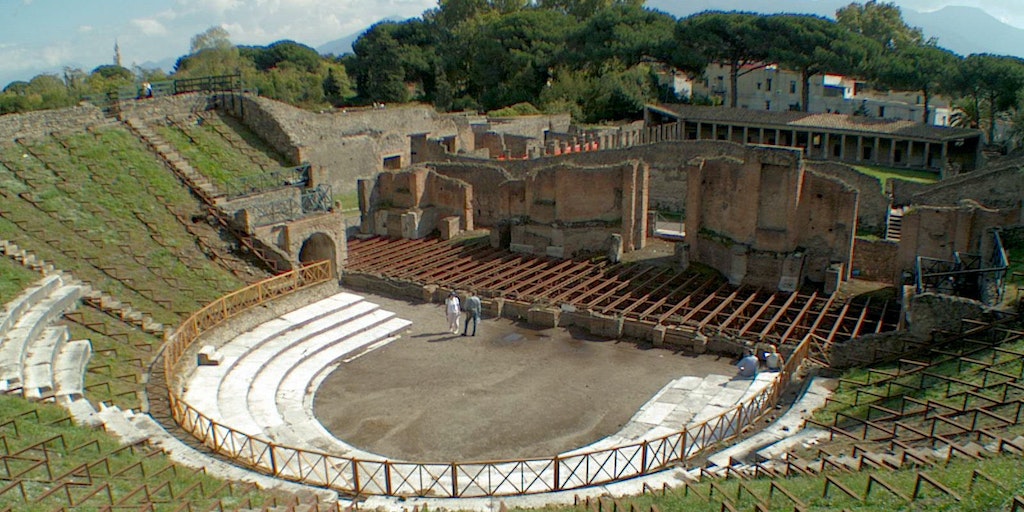 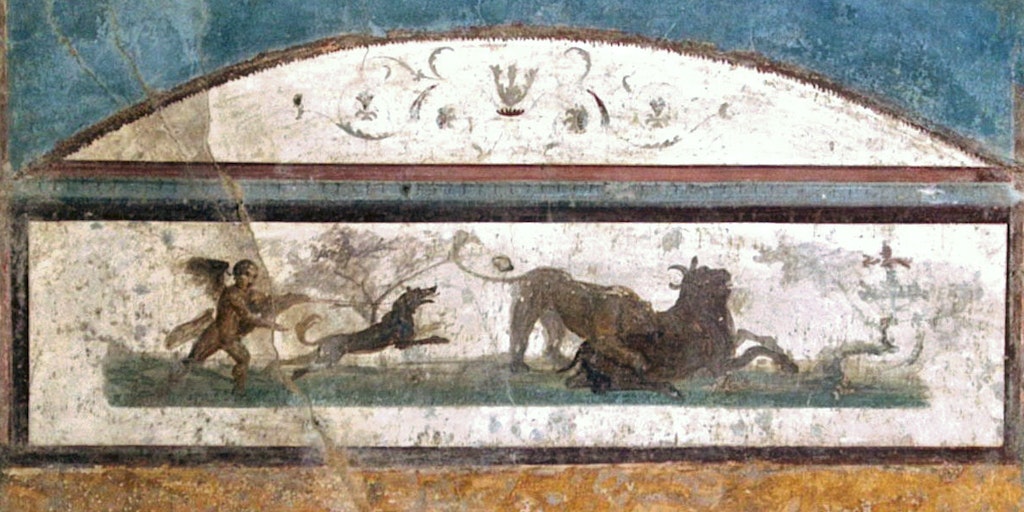 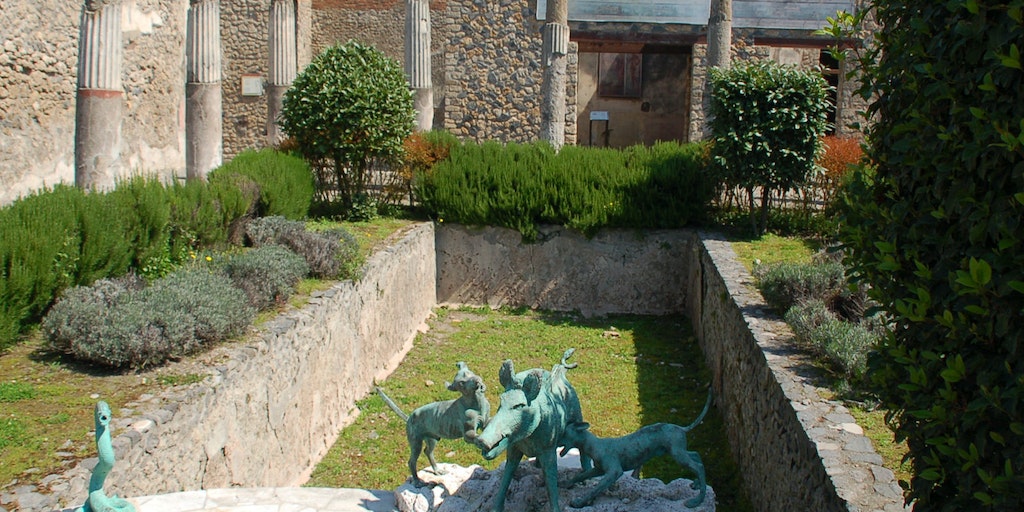 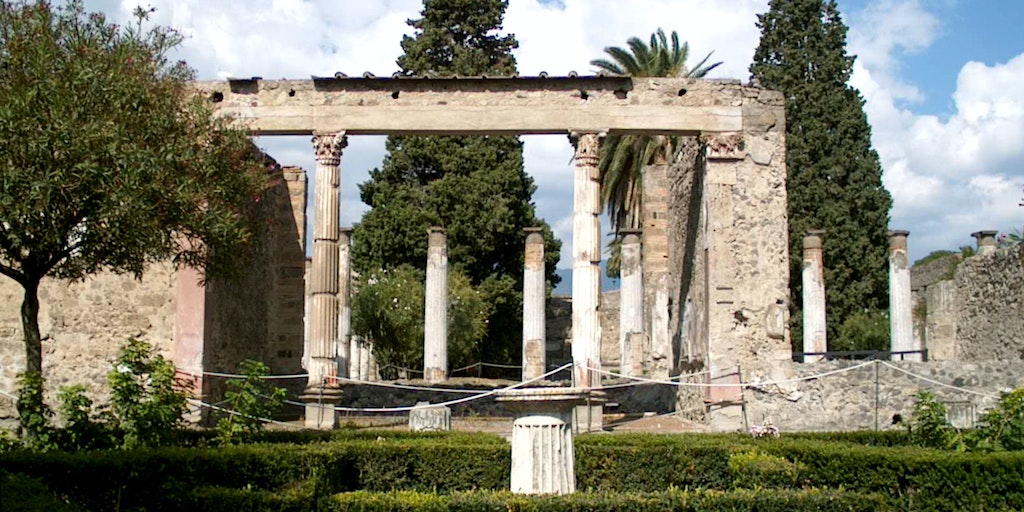 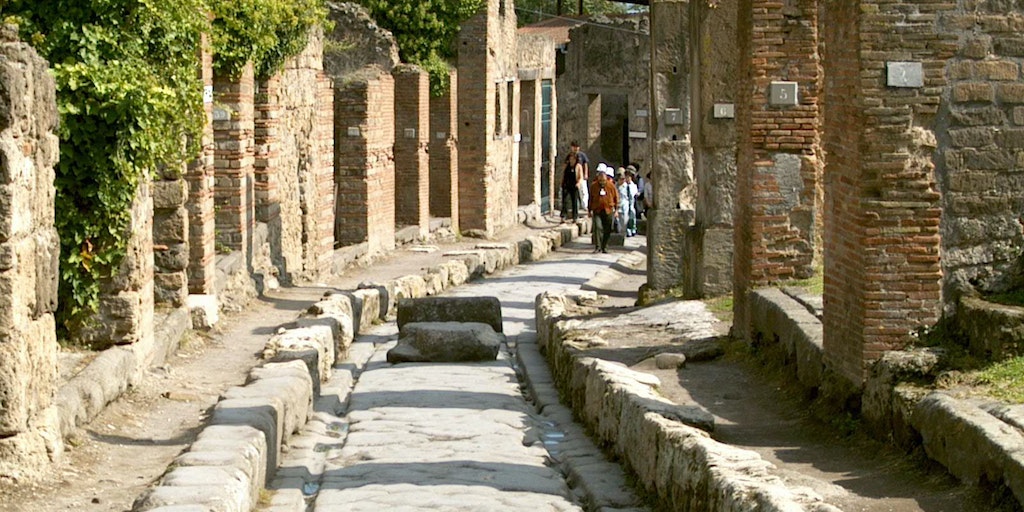 Loading content
This historical town dates back to the 7th or 8th century BC when the Greeks founded a settlement at the mouth of the River Sarno.

This historical town dates back to the 7th or 8th century BC when the Greeks founded a settlement at the mouth of the River Sarno. Then the town was for a short while under the control of the Etruscans until the Samnites conquered the area in the 5th century BC. Their rule lasted for over 300 years, until the Romans came. Pompeii eventually became a Roman colony and Roman culture came to have a great influence on all aspects of the character of the town.

For over 150 years the town flourished and grew into a prominent Roman town with baths, several theatres, many shops, brothels and a large population. All this came to a sudden end when the volcano Vesuvius erupted on 24th August 79. The lava never actually reached the town, but for nearly three whole days, Pompeii was buried beneath pumice stone and ash. Many managed to escape, but it is estimated that a couple of thousand people died.

Pompeii lay buried for centuries, but in the middle of the 18th century, the town was rediscovered and excavation began, which is still going on today. The whole town has been lying in a Sleeping Beauty-esque sleep, which makes this amongst the most extensive, and impressive Roman ruins ever found. Particularly fascinating are the hollows, which occurred as the ash covered the corpses. In the19th century, someone had the great idea of using these hollows as moulds from which they prepared a selection of statues of people in their death throes. These are both terrifying and fascinating at the same time! Most of them have been moved to Naples, but there are a dozen or so left in Pompeii.

Excavations have uncovered a big, colourful town, which needed 3 km of town wall to surround it. Most of the mosaics and paintings have been moved to Naples’ archaeological museum, but the small part which remains, especially the houses, roads, theatres and temples, provide more than enough of interest to fill 3-4 hours’ exploration.

As in all Roman towns, Pompeii’s centre was built up around a large square called the forum. It was here that political, financial and much of the town’s social life unfolded, and it is thus here that you find the most important public buildings. Around the forum are the remains of a large and impressive Greek-style basilica, the temples for Apollo and Jupiter, as well as Macellum - the huge market square. For a long time, most of the town’s trade was conducted on the Macellum, but slowly many of the tradesmen moved out to the big road, Via dell’Abbondanza, which leads off from the forum. The tradesmen tended to group themselves by trade, so that you would find the bakers in one section, butchers in another, clothiers in another – a tendency, which is still common in modern Italian towns. You can spend a lot of time exploring the many shops and houses in this district, but we recommend getting a guidebook, as there are not many explanations to be found on site.

There are also traces of how the Romans would spend their free time. There are bars, which served warm wine. Notice the large well-preserved chalices at the bar. There were plenty of Roman baths, as you would expect. The modern day rat race and workaholism were not concepts that wealthy Romans knew: work was a (necessary) evil, and those who could get away without it, spent their days in the shade, in the bars, on the sports’ field or with friends at the baths. They would bathe for up to several hours per day, and when they weren’t in the water, they would eat and chat with friends in other rooms. The baths were ingeniously divided into hot, tepid and cold, and members of the elite would even have a bath with running water in their own homes.

If citizens of Pompei felt a need for physical exertion, there was a large sports arena, where they could practise various forms of athletic exercise. There was also a pool to soothe the body following these exertions. A different type of exercise altogether could be taken at the brothels. It was very easy to spot brothels from the street, since they mostly had clear indications of what was on sale above the door outside. And, yes, we’re talking tasteful phallic sculptures! Inside there were often large illustrated explanations on the wall of the different services that were available.

No Roman town could exist without its amphitheatre! And Pompeii was no exception. Here you can find a well-preserved theatre with room for up to 12,000 spectators. They held gladiator fights, animal fights and other similar competitions here. There was also both a large and small theatre for plays. The large theatre, which was used chiefly for classical comedy and tragedy, dates back to the Samnite era and could hold 5,000 spectators. The small theatre dates back to Roman times and here they mostly performed music and mimes.