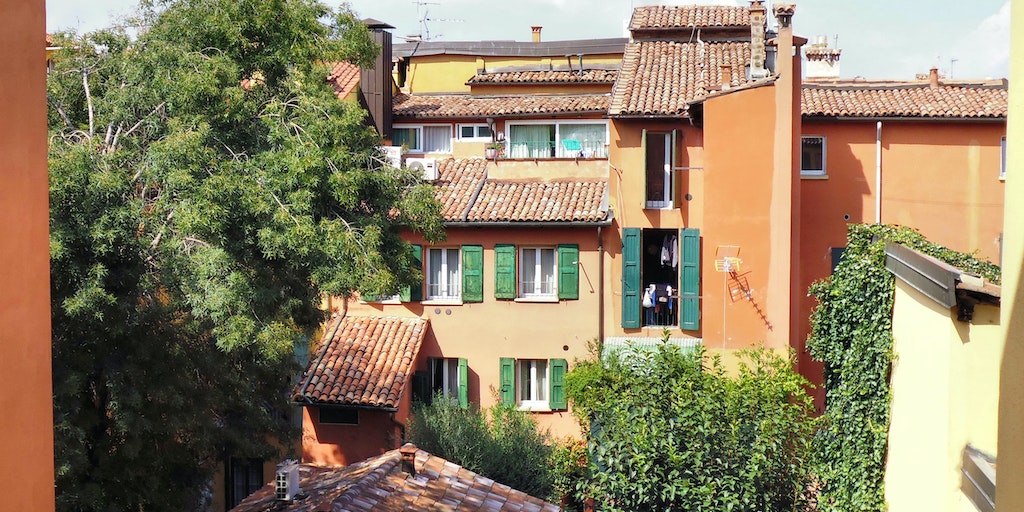 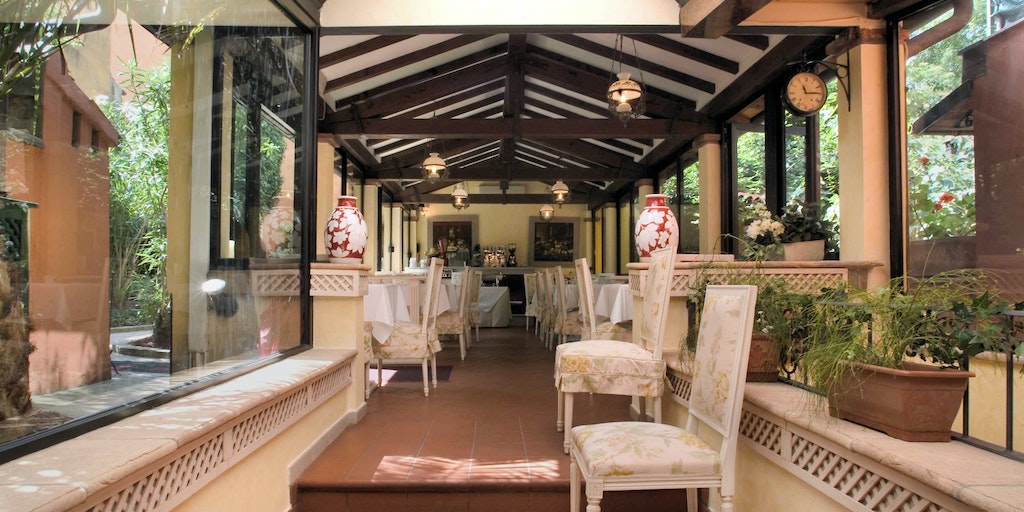 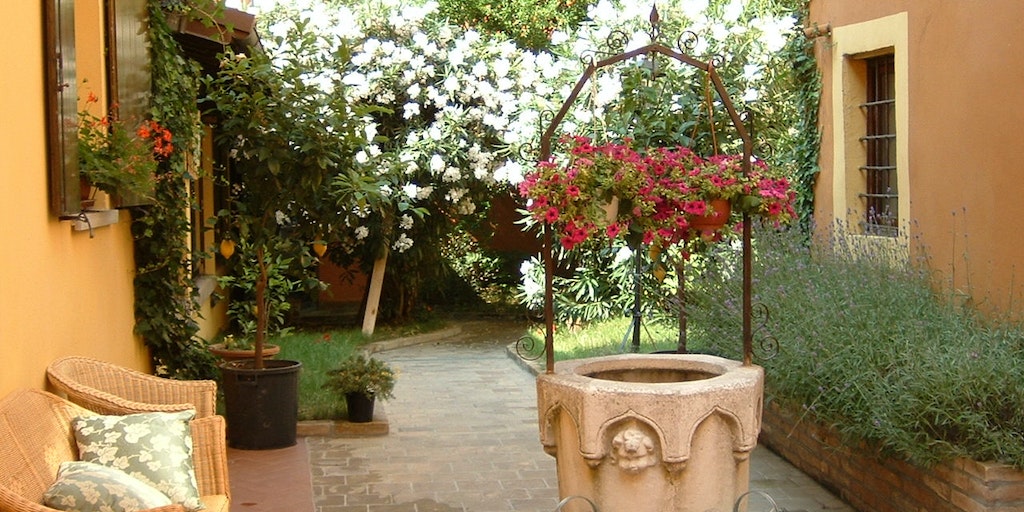 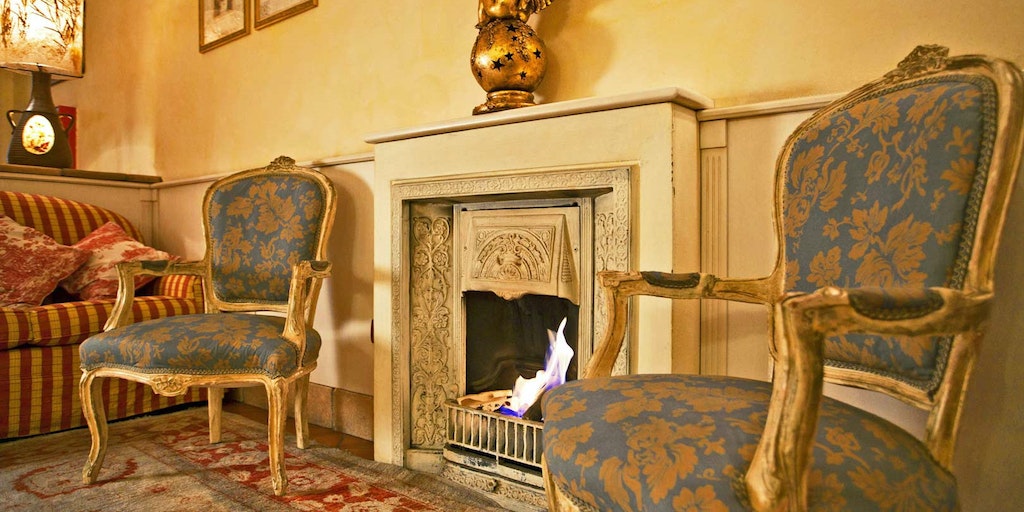 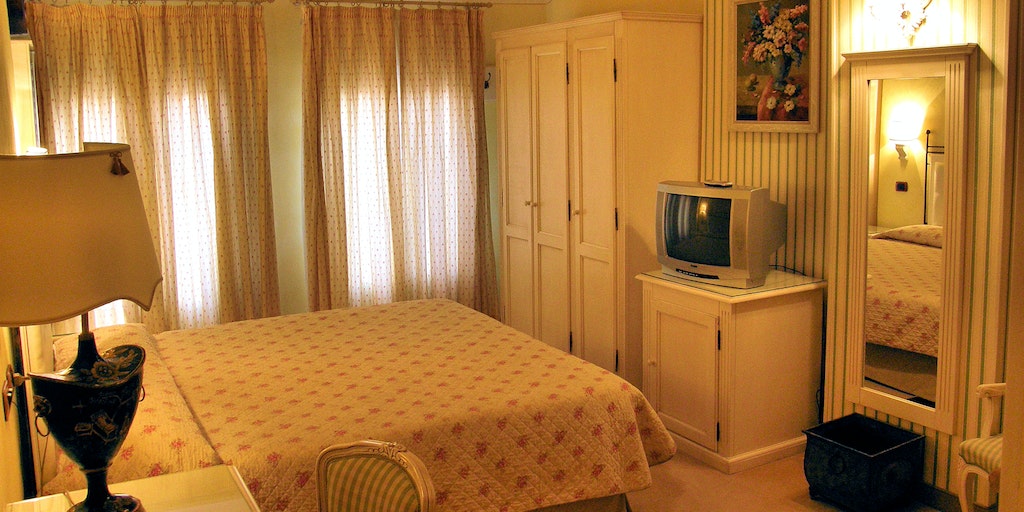 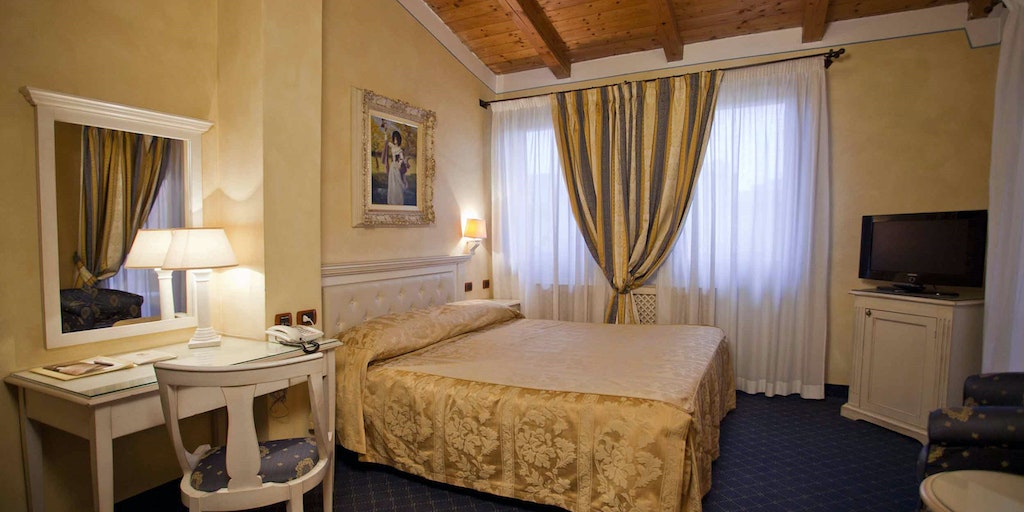 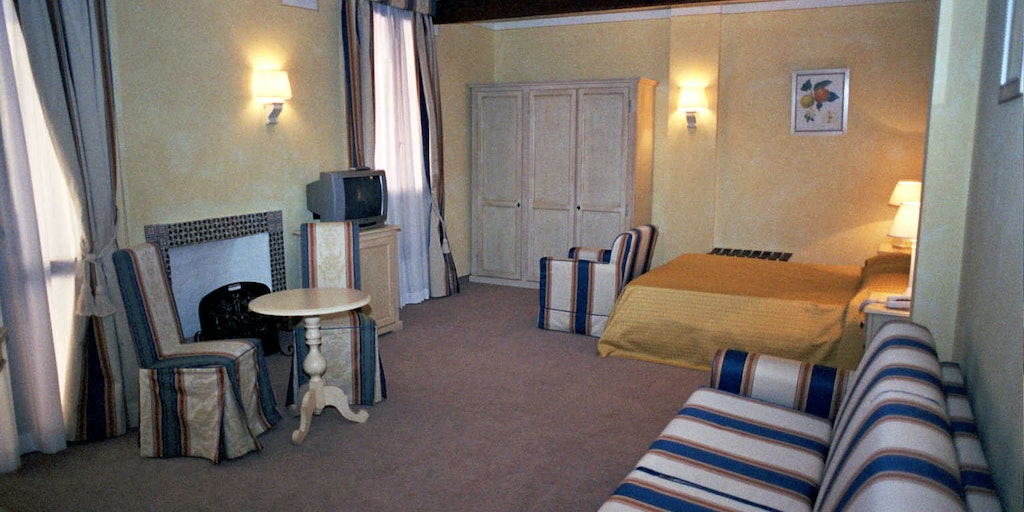 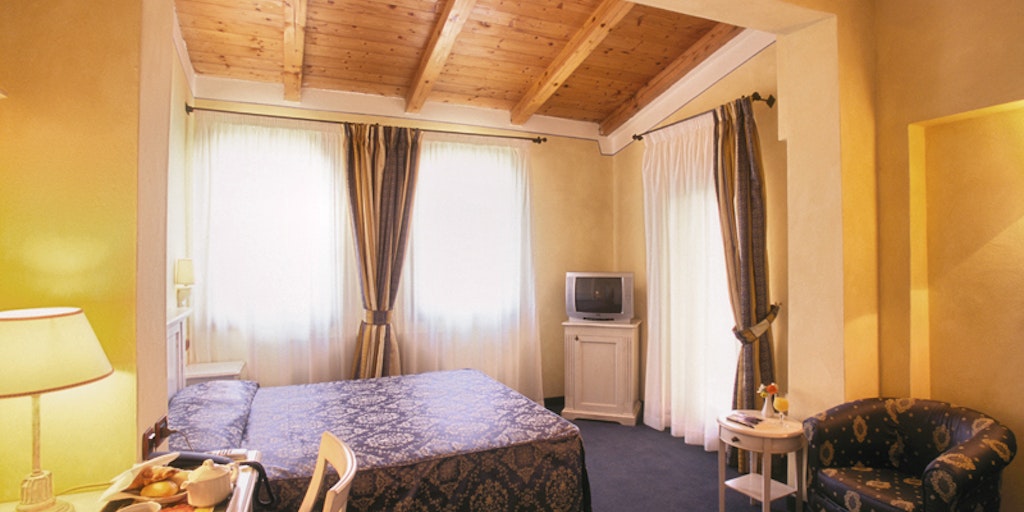 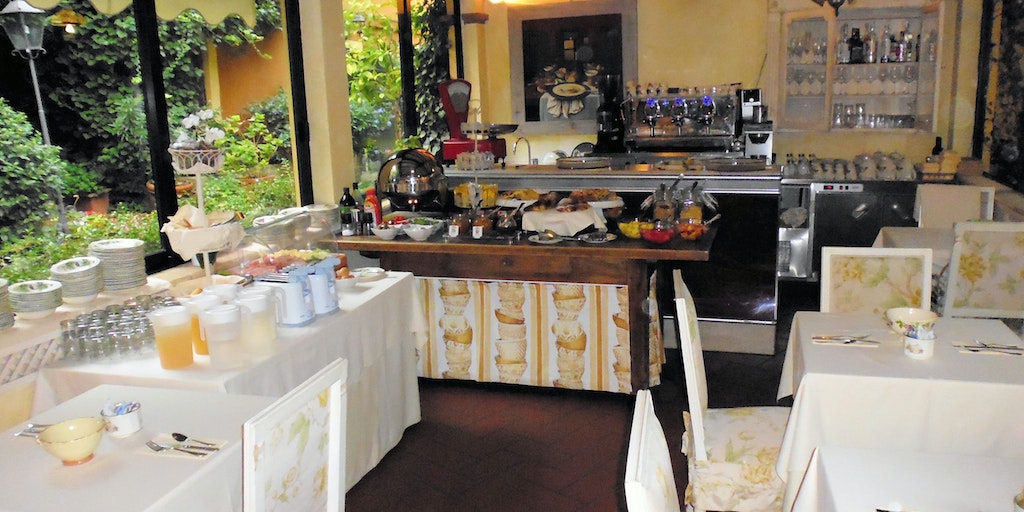 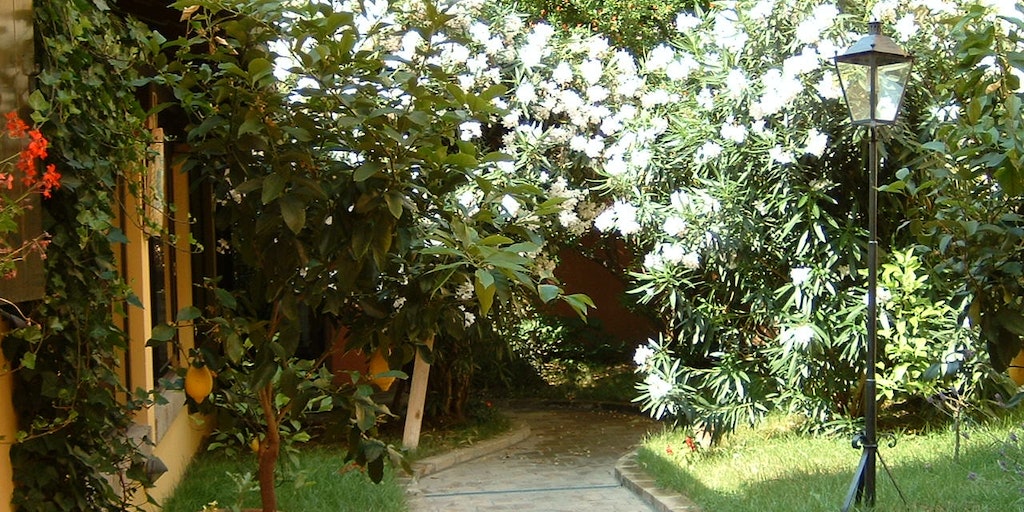 A cosy and intimate oasis

As well as the Piazza Maggiore, you will also find Fontana di Nettuno and Basilica di San Petronio nearby. The hotel is located in a small narrow street where the traffic is very limited.

This hotel is considerably different to many of the other central and traditional city hotels. It is more individual and the owner Roberto takes great pride in creating a friendly and hospitable atmosphere for both adults and children that visit. You can enjoy the breakfast buffet on the covered porch overlooking the courtyard and it is a true oasis away from the hustle and bustle of the busy city.

Services in the hotel

In the hotel, you will find a snack bar, a TV room, a patio, garage (on payment of a surcharge) and Wi-Fi in the rooms; Roberto requests that guests pay a nominal amount for the use of Wi-Fi, which he in turn he passes on to a charity for sick children. The hotel has only 15 garage spaces, and they are distributed according to the principle 'first come first served'. Alternatively, you can park at Staveco for a fee on Viale Enrico Panzacchi, there is a public parking lot near the hotel.

The hotel has 43 rooms which are decorated in beautiful, golden colours with much attention to detail. The style is classic with a romance touch. The rooms are all different, with respect to the old buildings original characteristics including beamed ceilings. They are distributed on the first, second and third floors and there is a lift leading to all floors.

There are two types of room at the hotel; classic and junior suite . The Junior Suite is the largest room and is furnished with two double beds. All rooms have air conditioning, satellite television, a safety deposit box, a mini-bar, Wi-Fi and a bathroom with a toilet and shower or bath.

Read about the rooms at Hotel Porta San Mamolo

Read personal reviews of Hotel Porta San Mamolo in in Bologna. The reviews of the hotel are written by guests who have travelled with In-Italia. All reviews are of course uncensored in order for you to get an honest description and review of Hotel Porta San Mamolo. In addition to the review of the hotel you can even get good tips from our guests on subjects such as day trips, restaurants, sights, beaches, local transportation and much more.

San Mamolo is located in an exceptionally peaceful neighbourhood in the South of the centre of Bologna. The hotel is located next to the street, but a quite one. There is only 100 metres to the vibrant Via D'azeglio and a 10-minute Walt to the historic centre.
There are three restaurants just around the corner, and as soon as you step out of the hotel you get presented with all the classic Bologna, with arcades and the characteristic yellowish buildings.
The service is friendly and attentive, lovely breakfast. "Cosy" is probably the closest we can get to an accurate characterization of this place.
There is a wonderful little patio that connects the reception and the breakfast buffet, it must be amazing during spring and autumn. And oh, be aware of Romeo the 'hotel-cat' - he can be a little overexcited if you pet him. We would love to stay here again!

All was well.
The travel agent was helpful and gave good information when we needed it.
The hotel we chose was very centrally located. The staff was very good and pleasant.
The breakfast was way better than we had expected.
We want to recommend Hotel Porta San Mamolo for all.