Agriturismo in Civita Castellana in Lazio

We've found these accommodations in the same area for you:
Agriturismo Fonte di Papa 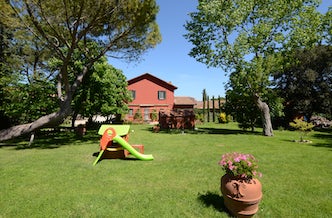 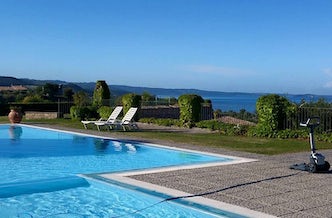 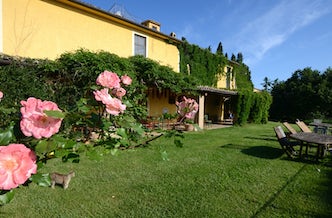 >> Read more about holidays to Civita Castellana here
Loading content
Casa Ciotti
Via Terni 14, 01033 Civita Castellana, Italy
Casa Ciotti is the central headquarters of 150 hectares of organic farmland from which fine products such as olive oil, fresh eggs, and garden vegetables may be acquired.

Casa Ciotti is located on the outskirts of Civita Castellana (3 km from the centre) along the ancient via Flaminia. Until the last century the farm was used as a stop for horse-drawn carriages that took travellers to and from Rome on via Flaminia. In those days it was a day's journey from here (40 miglia). A distinctive 17th century sundial hangs on one of the outer walls.

In the first floor farmhouse living room the papal troops signed the final capitulation to the newly formed Italian army and its general Cadorna in 1870. Eight days later they attacked and conquered Rome.

Casa Ciotti is set in a large green garden with oak trees, which are several hundred years old. It is a garden from the early 1900s with ancient roses, olive groves and green fields. The house was restored two years ago when the present owners left Rome for the country, where "the air is nicer", as they say. They have converted the farm to give guests an impression of how people used to live in the area before industrialization. Thus there is no TV, video or similar in the apartments. Unfortunately signs of modern technology are visible from the house as electricity cables are situated on the same side of the farm as the main road. However, this does not change the fact that adults and children are free to enjoy the garden and the pool. The sunsets over the fields as seen from the portico by Le Mimose and Gli Ulivi apartments are a sight to behold.

The apartments and the public rooms at Casa Ciotti are furnished with antique, comfortable furniture, and they all have a kitchen and bathroom. The swimming pool is behind the apartments in the shade of an old oak tree and close to a field with olive trees. You may also use the shared wood burner, reading room, table tennis and a number of other communal rooms. The farm neighbourhood is ideal for leisurely walks along old paths down towards the Tiber river. Here some of the mountain walls are full of fossils, and there are ancient Etruscan burial places and medieval castles and watch towers, which today are ruins.

In addition to olive oil the farm produces organic vegetables, fruit and eggs which can be bought and used to do some home cooking on the shared barbecue or in the oven.