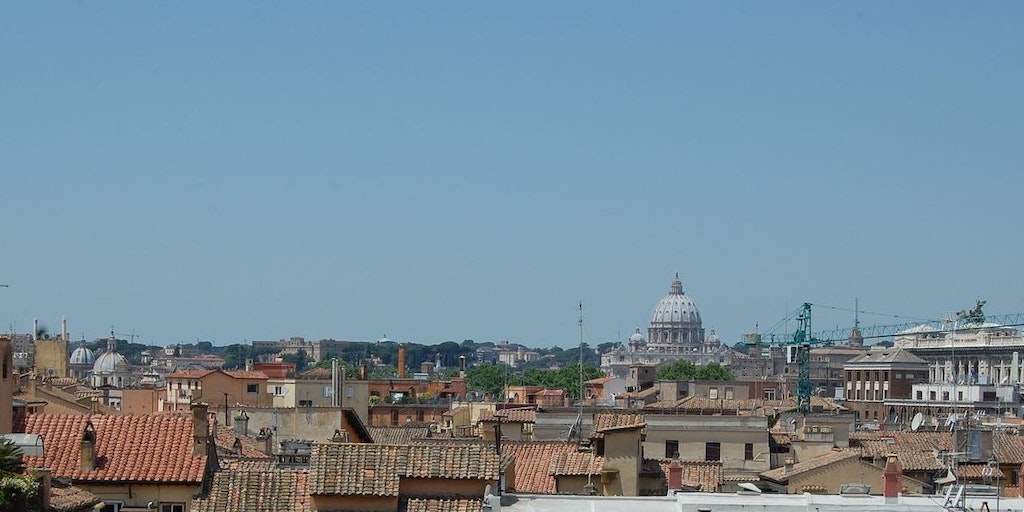 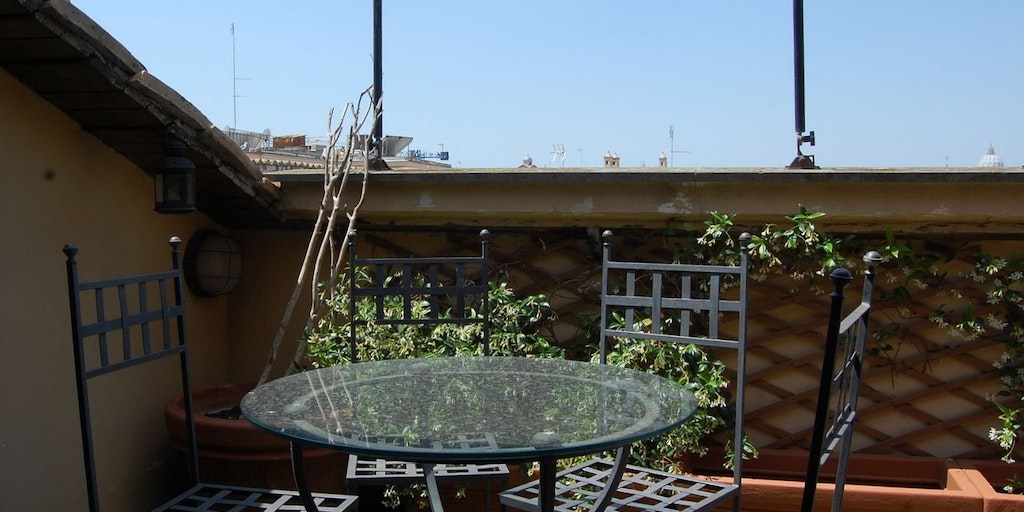 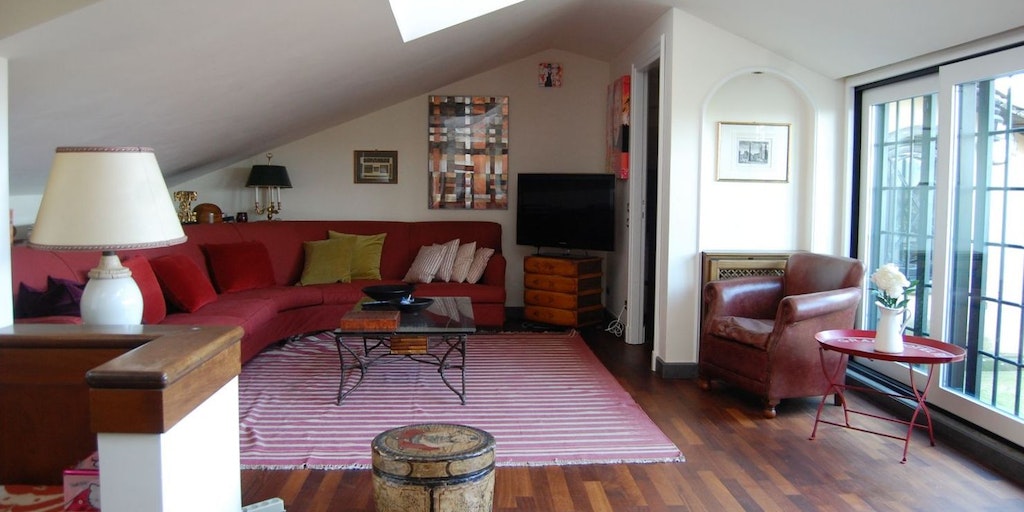 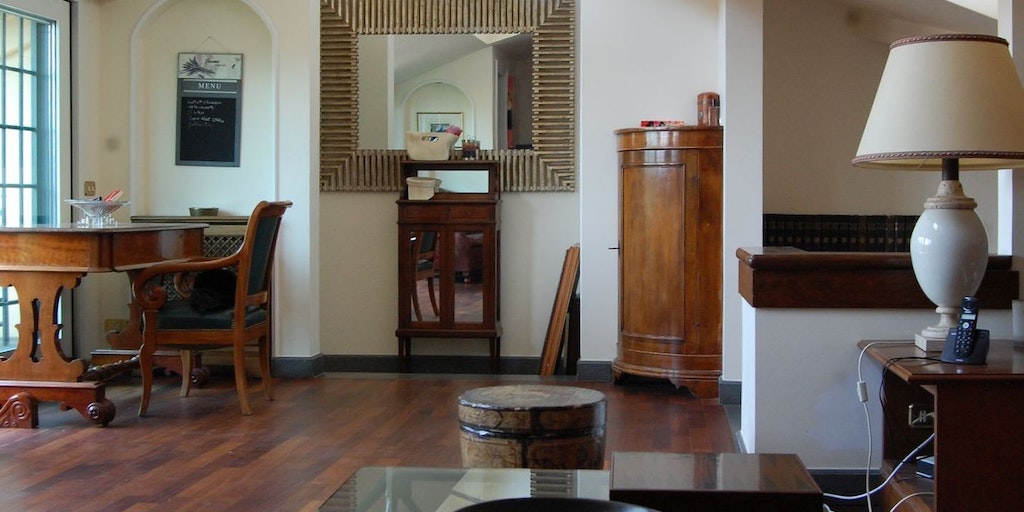 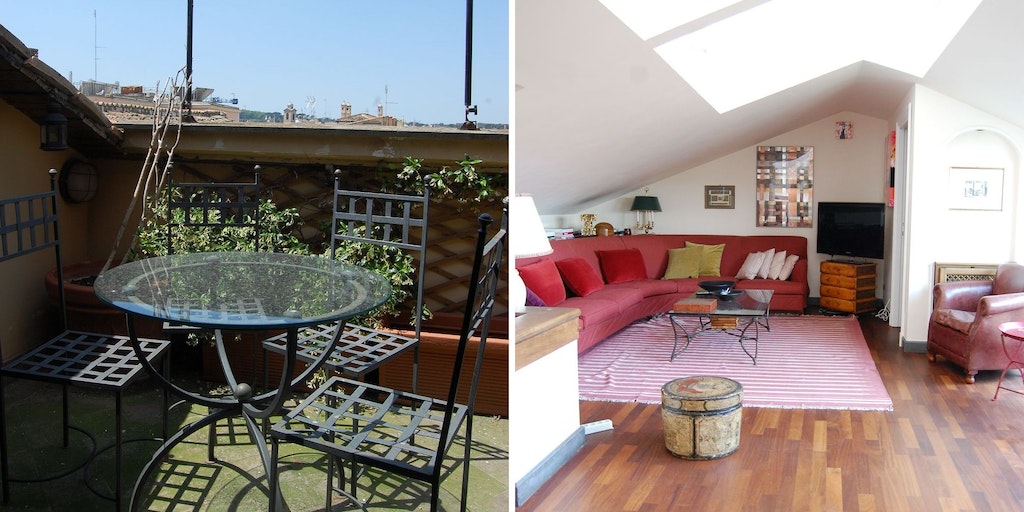 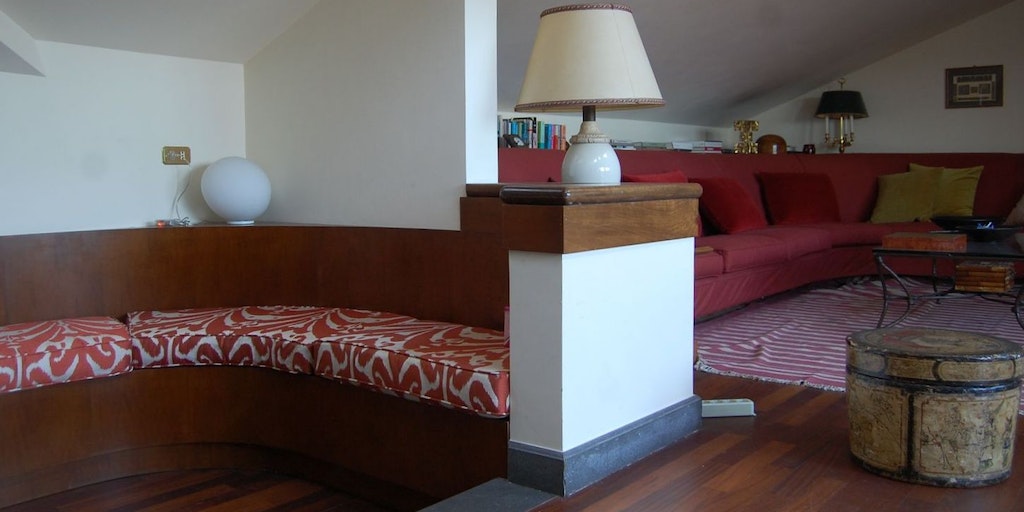 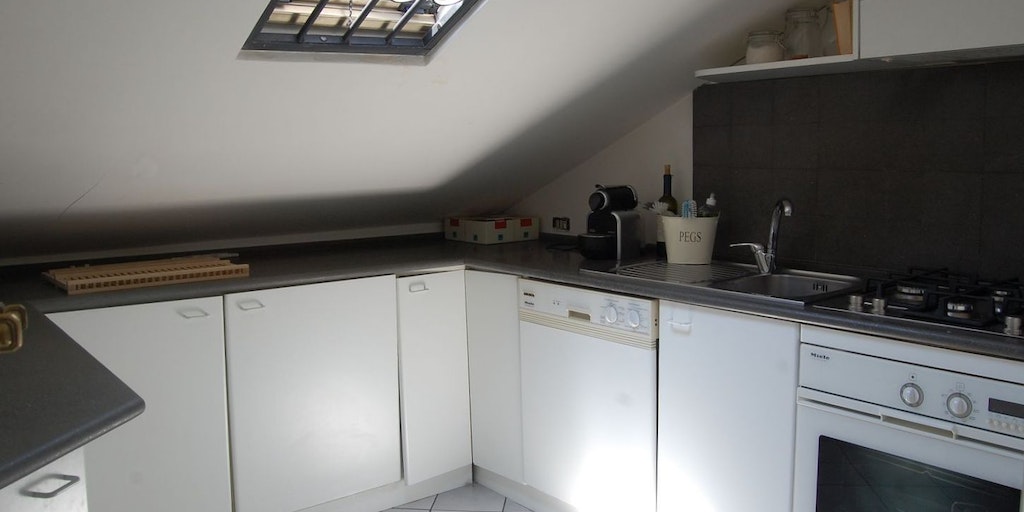 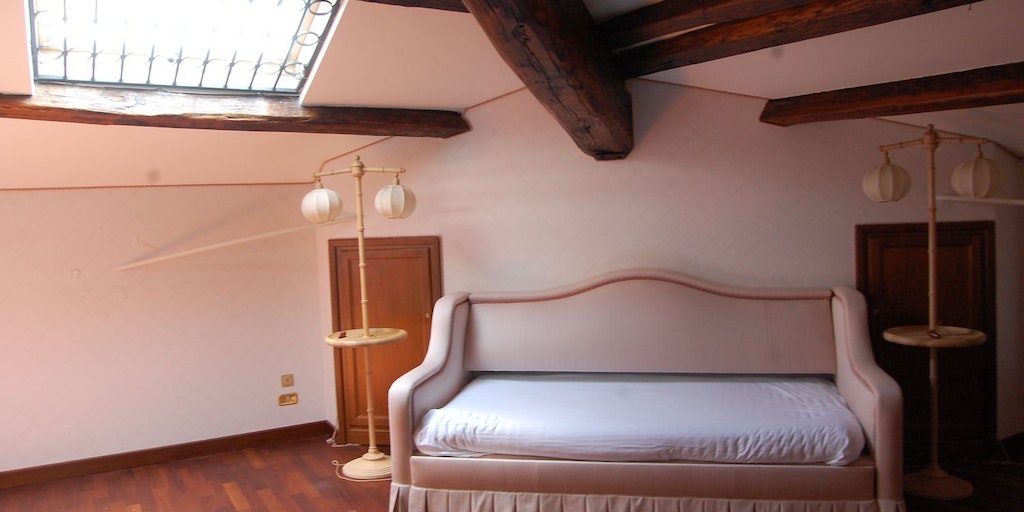 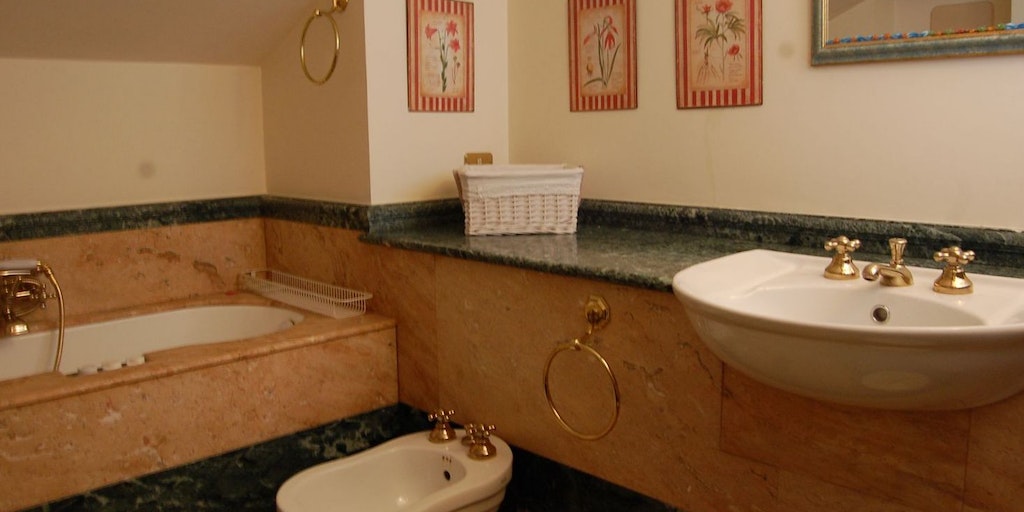 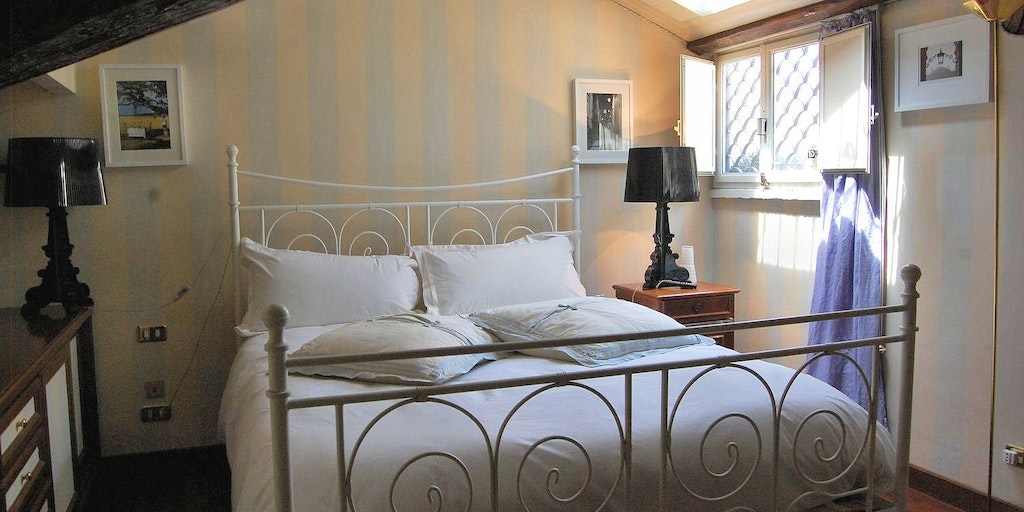 A great location and elegant

Terrazza Lucina
Piazza San Lorenzo in Lucina 4, Rom, Italy
The position between the Spanish Steps, the Pantheon, Piazza Navona and all the rest combined with absolute freedom from noise is very unusual, but in this noble palace it is possible. The apartment is rather spacious and elegantly furnished.

You can stay really comfortably here and make the most of the spaciousness after a day of sightseeing in the wonderful eternal city.

We would say that this apartment has many positives, largely the level of comfort inside, the terrace, the view and the location are all very positive. You can visit the Spanish Steps, the Pantheon, Piazza Navona and many other important sites nearby. The only negative is that the kitchen is rather standard for such an otherwise plush apartments, and the ceilings are a bit low in the kitchen.

Antique with all modern comforts

The apartment is furthermore quite spacious and very elegantly furnished. There are beautiful parquet floors everywhere and the bathrooms are exceptionally beautiful. The many pieces of antique furniture contribute to the luxurious impression. The modern comforts are not lacking either for here is air conditioning, satellite television with a DVD player, wireless internet, a dishwasher and a washing machine. From the living room you have an approx.15 m² terrace with views of the Eternal City all the way to St. Peter's Dome.

Read personal reviews of Terrazza Lucina in in Rome. The reviews of the holiday home are written by guests who have travelled with In-Italia. All reviews are of course uncensored in order for you to get an honest description and review of Terrazza Lucina. In addition to the review of the holiday home you can even get good tips from our guests on subjects such as day trips, restaurants, sights, beaches, local transportation and much more.

Misleading marketing
The address on the apartment Terrazza Lucina is not as described on the website: Piaza San Lorenze in Lucina number 4 - But Via in Lucina number 17!
It gave us a long number of issues on our arrival that Saturday in heavy rain. The contact did wait for us at number 4 at the lot, but we had to, after first having crossed the lot in pouring rain, go out on the Corsoe with our bags in the pouring rain and around the whole quarter before we finally reached the entrance and dry weather in Via in Lucina.
The cab had driven a long detour to reach the Piazza. If we had had the correct address, we would've, without the detour, dropped off in dry weather at the port Via in Lucina 17!
And we had also assumed that when we went out and came home - that it happened via the Piazza.
Romantic - yeah - but that's what your misleading marketing creates expectations about.

Quality and price:
By reading the only review the apartment had so far, we had been informed that the kitchen had slanted walls, and that in 2009 it was missing a bread knife. That the walls still were slanted with poor workspace we expected, but not that the bread knife still was missing!

Saturday we were too tired to complain about the inadequate lighting in the kitchen, hall, and living room, due to a number of missing or defect light bulbs. What was worse though, was that there wasn't any hot water in the taps. But Sunday morning we called the contact person Luca.
He promised that the lighting conditions would be fixed Monday - and he claimed, that when he left, that we had hot water.
And we did to a certain degree - but if seemed totally random, when there was hot water and how fast it got cold again, and under all circumstances you had to wait at least 5 minutes to get hot water, if you for example wanted to wash your hands.
When I myself experienced that I had to wash soap off with cold water under the morning shower, and when wife, while she was washing her hair, also suddenly needed hot water, we called again Wednesday to Rome sweet home - Also to tell them that the lighting issues hadn't been fixed Monday as promised (Tuesday they put some useless light bulbs on a shelf, while we were out).
Now there immediately came a female worker, who momentarily provided hot water - it disappeared again within 15 minutes after she left.
But unlike Luca, she had shown me how to manipulate certain buttons and settings on the water heater so you, for example, could get hot water if it disappeared again.
So the rest of the sat we managed the issues ourselves, so good that it only was our grandchild and myself that stood in the cold shower once, each. Even if standing under the shower is so much talk. Cause in that bathroom, which there isn't a picture of on the website (what is maybe understandable, but no acceptable), can't a grown up Danish man stand and bend himself together - and the slanted walls in the other bathroom also prevent standing raised. So mine (and my wife's) turns in the shower was spent on our knees.
The view to the St. Peters church was as beautiful as on the picture - which sets off the one star. The other is given because the cleaning was the best we've ever experienced in Rome.