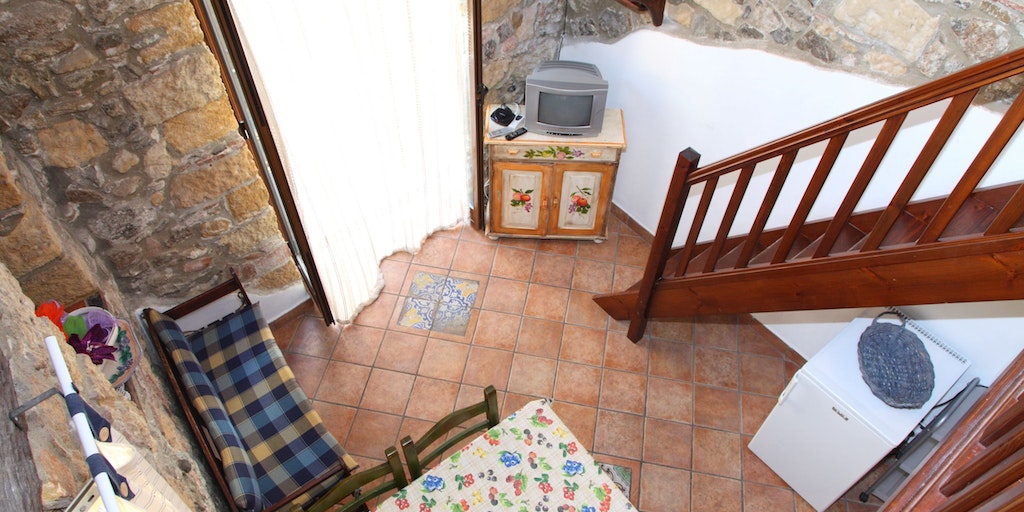 Read personal reviews of Casa Saraceni in in Sicily. The reviews of the holiday home are written by guests who have travelled with In-Italia. All reviews are of course uncensored in order for you to get an honest description and review of Casa Saraceni. In addition to the review of the holiday home you can even get good tips from our guests on subjects such as day trips, restaurants, sights, beaches, local transportation and much more.

In general I can not recommend anybody Casa Saraceni - because of 10 reasons:
1) It is difficult to get through the tight entrance door
2) To climb the stone-stair on the way up to the mini apartment almost take that you in some way are athletic.
3) The area around the toilet is so small that it is even hard to use the toilet.
4) The area around the bath is so small that it is even hard to turn when taking a shower
5) The light is really bad. There is not one place, where you can read a book after it is dark
6) It is so hot in the apartment, that it is almost impossible to be inside (also in September)
7) It is so hot, that it is almost impossible to sleep, because it easily get like 30 degrees inside (also in September)
8) There is a lot of noise coming from the street, even at night, where cars and motorbike are making noise.
9) Even though I paid for a whole week, nobody said something when I left one day earlier
10) During the week nobody asked how I was. I did not even get a question like " How are you, can we do something for you?".

Cefalù as a holiday destination

There is way too many tourists in Cefalu. If you wanna have a good holiday, then its all about getting out site the tourist ghetto. Go rent a scooter and drive around in the mountains and visit the small cities or sail to small islands like Vulcano.

A little, well-suited apartment with Disney-boudoir

Cefalu in October can be warmly recommended. Non surprisingly the city's residents are super willing to communicate, despite the language barrier and are also very comfortable to be around. The weather is mild and sunny, life in the city is accompanied by at least as many tourists, as locals. The beaches surrounding the city are fine and the bathing water is perfect, and a lot of Sicily's history is seeing and experiencing in, and around the city, if you want to enjoy more than just the mere good mood in the small streets and cafes.

Casa Saraceni is a nice one room apartment, that is equipped with a lot of thought. It can be nice to know in advance, that there is everything from a flat iron, to a hair-dryer, to hanger rail and drying rack on the balcony. Despite what there is for cooking, washing and cleaning.
The apartment was shining when we arrived and the big nice towels, we had ordered, were changed once during our weeks stay.
It would have been nice if the bed linen had included two individual sheets to take over oneself, rather than one for sharing.

As far as trash sorting goes, both the "organic" and "unspecified" trash flies, so it would be nice to have two separate trash cans with lids and hooks for bags for other types of trash.

The apartment is in a medieval town house with its own entrance. From the little balcony you can follow the life on the main street around the clock in the old part of town. Despite the double doors to the balcony and two windows, the apartment is pretty dark, which can be and advantage during the years hotter months.
The sleeping loft is low - my daughter is only 165 cm, and couldn't stand straight up, in it. The air in the loft also got hot, and is difficult to replace. Some holes in the lofts floor along the back wall could without an electric air-conditioner, start the circulation.
Since there was two bed frames, it would have been fine, if there had been two separate mattresses, rather than a double, so you could decide for yourself, if the beds should stand together or apart from each other.

Wifi, we ordered, differed from functioning like our own at home, and not at all. In rain weather there would arise very few breaks in the power supply, which is unproblematic, except for the fact that it resets the router, so a person from In-Italia has to be called to reboot it, before it can be used again.

The buildings original building materials, stone, terracotta tiles, marble and dark wood, is lead on in a gentle restoration and a harmonious unpretentious lay-out in of the apartments ground floor. The original but discrete look was one of the reason, I exactly chose this apartment amongst many in Cefalu.

Unlike the ground floor, the loft showed itself with its turquoise headboard with painted pink roses, white scarves and boxes and jars in pastel with glued on shells and dried flowers, with a collection of flower materials on glass, there must have been a sale in a local souvenir shop, to remind of a boudoir Disney princess. Maybe the thought of a play-mobile man was the pastel colours details follow up by a orange blanket.


When I rent myself into individual spaces, I hope for something other than randomly chosen play-colours (whether it be for princesses or lego men) and other than furniture, mirrors, nips and other decorations with rustic fruit- and grapevines or glued on plastic- silk flowers. That type of interior decoration I can find in any uninspired hotel.

Nice for me is, that the buildings age and history can be seen both in- and outside and that the apartments inventory, colours, furniture are chosen so that the harmonize together with the building, that they are in. If it needs nips to give the rooms character, then I would relax better with a simple bric a brac, that tells about the places history, for example an old photo or map, or a few local arts and crafts, there are just a bit better than those of the souvenir shop .

The fine map over the city, In-Italia gives, where all the historic buildings and monuments are marked, could also have been handy to have hanging on the wall.

If you travel all the way to Cefalu with public transport, it can be practical to know, that the trip from Palermo airport to the station in the middle of the city, Palermo Central, takes an hour with a shuttle-bus

We thank you both for you praise and criticism. It is nice to hear, that you appreciate the contact you had with us before your holiday on Sicily - and at the same time we are sad to hear, that the contact with our local business partners weren't exactly up to your expectations. To be completely sure that we don't misunderstand each-other, I need to specify, that In-Italia, hasn't got co-workers or staff on destinations in Italy. We cooperate with local partners, who are agents, hotel hosts, or holiday home owners. This means the the locale representative isn't an In-Italia employee. This doesn't mean however, that we disclaim our responsibility from that service, that you received at your destination. All that belongs under decoration and lay out, taste and stile, in the same /different residential forms around Italy, is exactly this - Personal preference. Welcome home, kind regards In-Italia

Rating 3 of 5
Average
Based on 2 reviews
from In-Italia's guests
?
See questions and answers