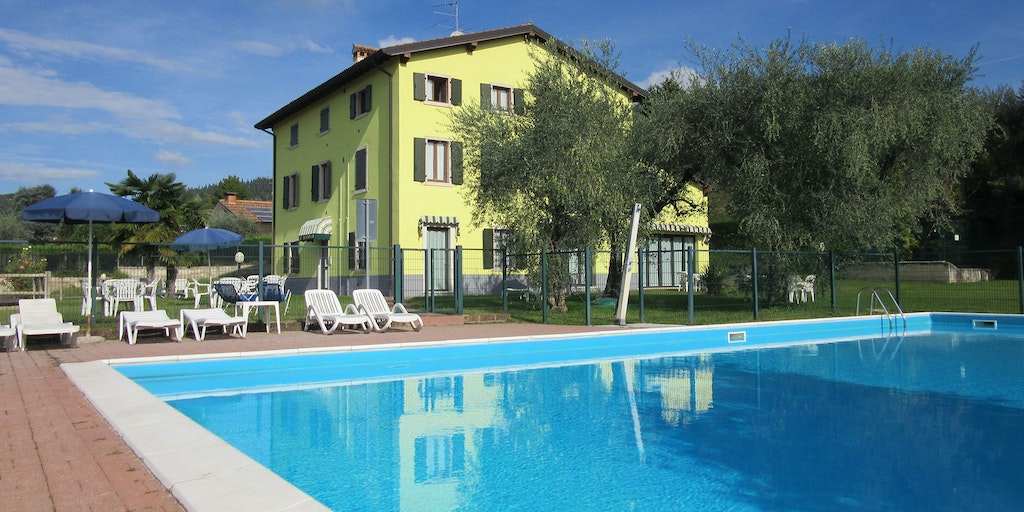 Comfortable accommodation on the edge of Bardolino

Overall we were very happy with our stay in Ca' Bottrigo. We booked a 2-bed apartment which was actually a one-bed and a studio combined. The studio (5M) was on the first floor and had wonderful views over the lake; the adjoining one-bed apartment (5A) was fine but faced the back of the building with a disappointing/non-existent view and the kitchen/living area was small particularly as we were also using it as a sleeping area. There are 10 units in the building and there were a mixture of families staying there; couples of varying ages, some with babies, not many older children. The pool was often empty, even in August, and there were plenty of sun-loungers, tables and chairs. Parking can be a little 'tight' but manageable. The 15 minute walk in to Bardolino is relatively flat and pleasant but there is no street lighting on the road by Ca'Bottrigo so a torch was useful. We missed the fact there wasn't any air-conditioning although the local agents provided us with one fan which was invaluable. Being on the first floor we also opened the windows wide at night as there was usually a good breeze coming down from the hill - this might not have been an option on the ground floor. No cleaning was provided in our apartment during our two-week stay which surprised us - also we had hired towels and sheets but these were not changed which was disappointing. WiFi was excellent throughout our stay.

Lake Garda as a holiday destination

This was a great location for a family holiday with teenage children. Very European with mainly German and Dutch tourists but a good mix of nationalities and it was busy so expect to queue for most attractions (and occasionally a table at dinner) but it felt safe and was a great place for a family holiday. We hired a car at the airport and although we only used one tank of fuel for the entire holiday, it was invaluable. During our fortnight stay we managed to tick off Gardaland theme park (although the queues for some rides were about 1 hour), the water park, shopping trip to Milan (caught the train from Peschiera del Garda - very straightforward), visited Venice on a bus trip from Bardolino, went to the opera in Verona, caught ferries across the lake, took the cable car up to MonteBaldo from Malcesine from where there are lovely walks and bike rides as well as enjoying some lazy days in Bardolino. We visited in August and it was busy; particularly some of the roads between Peschiera and Lasize as the crowds arrive each day to go to Gardaland and Caneva water park. Also beware the traffic jams on Saturday (assume it's changeover day) - leave plenty of time to drive to the airport (our expected journey time doubled). We felt it was an expensive holiday - there is lots of ways to tempt you to spend your money and we thought prices were high, for example entry prices for the theme parks were over £100-£125 for a family of four (with long queues for rides once inside), £220 for a day trip to Venice, and evening meals were usually about £65 for one course with drinks. Even the ferries across the lake seemed expensive (£65 for a family return ticket from Bardolino to Sirmione). We rarely felt we found a bargain with the exception of the fact the sales were on in the local clothes and shoe shops when we visited at the end of August. However, given the holiday felt more expensive than others we've had elsewhere in Europe (e.g. Greece) we really enjoyed our time in the area and would recommend it.

Show all reviews from Residence Ca' Bottrigo
Rating 4,1 of 5
Very good
Based on 25 reviews
from In-Italia's guests
See location
?
See questions and answers