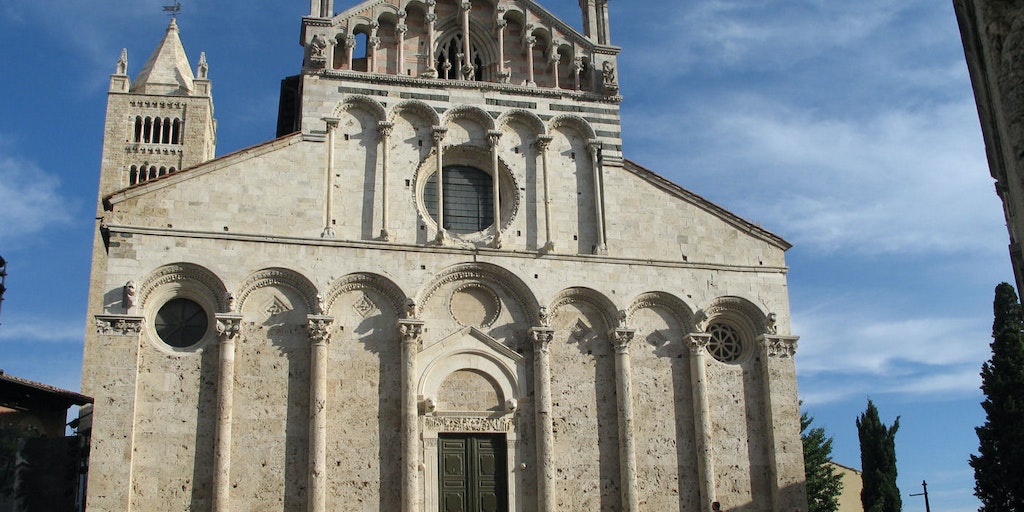 Loading content
The cathedral is dedicated to Saint Cerbone, who was bishop of Populonia from 570 to 573. The church was built at the beginning of the 12th century but was rebuilt and extended later. Two building styles are noteworthy: the Romanesque and the Gothic (the latter being masterfully used by the famous Giovanni Pisano for the new facade from the 13th century).

The entire church is decorated with arches and animal figures. The main door on the facade has five bas-reliefs showing the same number of episodes from the life of Saint Cerone. The large bell tower has many windows with between two and five lights. The part of the building situated between the bell tower and the apse dates back to rebuilding work carried out between 1287 and 1304.  The many sided apse is the most striking characteristic of this rebuilding work and its Gothic building style harmonises well with the original Romanesque building.

The church is divided into three aisles decorated with a long row of travertine marble columns with Corinthian volutes, alternating with classic volutes with sculpted patterns of leaves and animals. In the right hand aisle by the entrance there is a Roman sarcophagus from the 3rd century AD, above which hangs a painting from the 13th century showing Our Lady with Jesus and Saint Francis of Assisi and Saint Katarina of Alexandria at the sides. The most impressive feature of the church is the 12th century masonry (possibly earlier) in a corner of the church. The stone has over the centuries developed an almost black surface and here you can see what we today would call naivistic figures of a long-haired Jesus (resembling a woman), the disciples and other biblical figures.