Pisa, Tuscany Other places of interest in Pisa 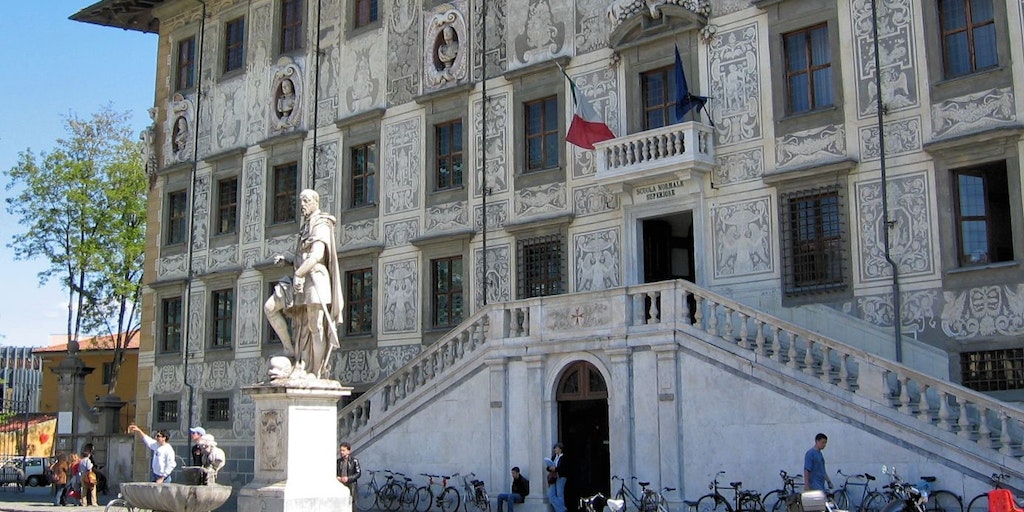 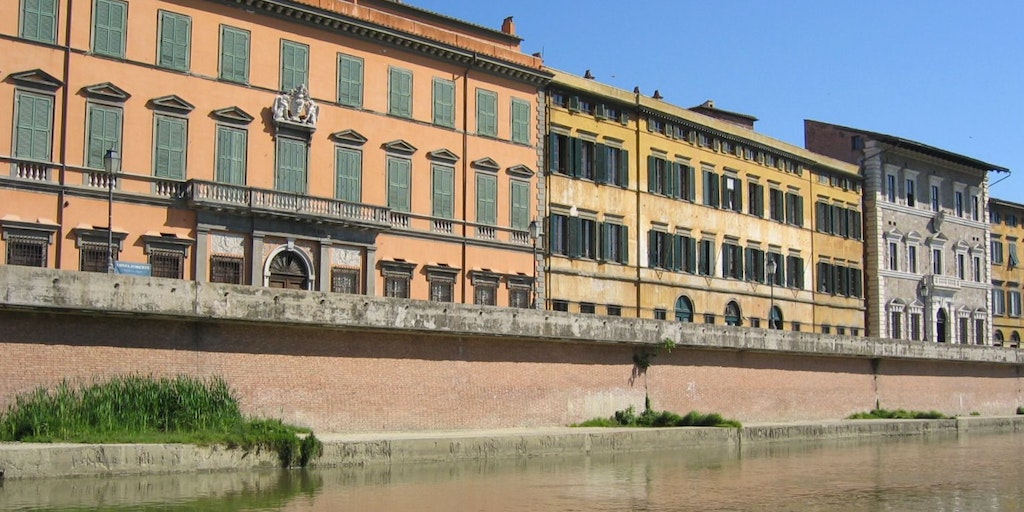 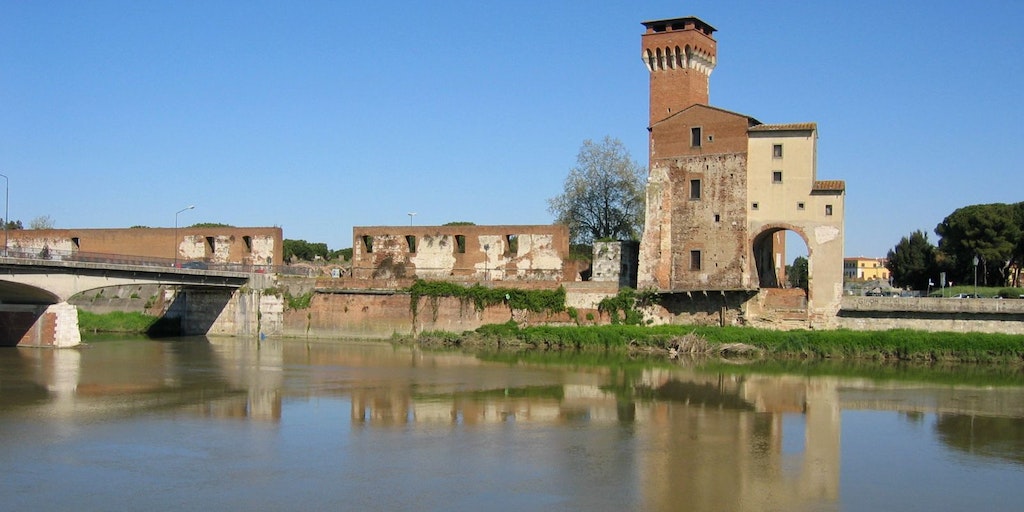 Loading content
It is easier to find churches rather than normal buildings and streets interesting, and therefore the descriptions of the secular delights below are shorter than the previous. This should not be taken to mean that Pisa’s biggest attractions are churches, but rather that the fascination of the small alleys, the charming squares and the inviting cafés is not as easy to describe as the origins and contents of the churches.

It is easier to find churches rather than normal buildings and streets interesting, and therefore the descriptions of the secular delights below are shorter than the previous. This should not be taken to mean that Pisa’s biggest attractions are churches, but rather that the fascination of the small alleys, the charming squares and the inviting cafés is not as easy to describe as the origins and contents of the churches.

It should be immediately pointed out that the charm of Pisa is different to other Tuscan towns visited by tourists. Pisa is not as polished as the other towns but more genuine. The atmosphere is characterised by the fact that Pisans work, do business and eat here. Pisa is a town for its own residents and their demands take priority over tourism. Therefore, Pisa is less picturesque and more everyday than so many other Tuscan towns. Where San Gimignano exists for the sake of the tourists on their premises, and Siena welcomes tourists on the town’s terms, Pisa is a town for Pisans and tourists just have to join in.

Piazza dei Cavalieri
This used to be the town centre. In the 1560s the square was recreated by the great Florentine architect, painter and art historian Vasari. The square was to be the home for the order of the knights of Saint Steven, which Cosimo I of Medici had created to combat extensive piracy in the Mediterranean. Vasari also rebuilt the former Palazzo degli Anziani and created the headquarters for this order Palazzo dei Cavalieri. He created Torre dell’Orologio for the knights by merging two medieval towers: Torre delle Sette Vie and Torre dei Guilandi. Using an ingenious construction method Vasari avoided blocking the road which ran between the two towers. The square is also home to Chiesa di Santo Stefano dei Cavalierie, a church in complete Baroque style built to Vasari’s plans.

The walls
Back in Roman times, probably even Etruscan times, Pisa had town walls to protect the town from unwelcome visitors. In the middle of the 12th century the first walls had started decaying as the town had expanded so much that the walls now stood between the houses. A traveller visiting Pisa in the first half of the 12th century describes the town as having no walls. Of course, the walls were there but the traveller simply couldn’t see them because of the houses.


In 1155 the town’s leaders started work on a new town wall which would stretch over 7 km and encircle over 390 hectares. This type of extension of the town walls was very normal in medieval Tuscany. Typically the larger towns had town walls dating from Roman times which were replaced at the start of the 12th century by new and larger walls. Inside the walls were large areas of wasteland. This was a common practice as it ensured the town space for further expansion and was important in periods of extended sieges.

A large part of Pisa’s second wall still stands proud today. Walking all the way round is quite a trip but you can get a good impression of the wall in the western end of Piazza dei Miracoli behind the baptistery. If you have more time it is fun to walk to Piazza delle Gondole where you can walk on a short stretch above the walls.

Via delle Belle Torri and surrounding area
If you want to get an idea of how Pisa looked in the 1200s when the towers of the mighty families dominated the town, you should take a stroll down Via delle Belle Torri and its side streets (Via del Cuore, Via S. Pierino, Via del Teatro and Via della Scuola). Here you can see many of the old towers in the construction of the houses, which were once the pride and security of the main families in the town.

Museo Nazionale di San Matteo (Tuesday - Saturday 9:00-19:00)
Next to the church bearing the same name in the former Benedictine monastery you find this impressive museum. It is undoubtedly one of Tuscany’s most interesting museums and certainly one of the most obscure. It contains a large collection of Tuscan sculptures and paintings from the Middle Ages and also some works from other periods.

If you have to select a single group of works it has to be the many painted medieval crucifixes. These hung in most churches of a certain standing and it is thought that Pisa was one of the largest producers of this type of religious art. Here you have a rare opportunity to compare the various versions of the theme Christ on the cross. Notice the difference between the two basic types: Kristus Triunfans and Kristus Patiens. The first type shows a conquering Christ, experiencing the crucifixion as a triumph while the second is the suffering Christ the martyr. Generally the first type are oldest while as the years pass the more human side of Jesus is portrayed.

Another interesting subject is the large collection of medieval ceramic bowls of widely differing origin. In many cases they were incredibly expensive and used in the most elegant decoration of the church’s facade. On many of the churches in the town you can still see copies of these bowls high up. Notice the lavishly decorated bowl of Arabic origin.

Piazza delle Vettovaglie and surrounding area
In the heart of Pisa’s medieval centre you will find this little quadratic square. On it and in the streets around it there is a daily food market. Here you can enjoy the genuine charms of market life as it has taken place for millenniums with nothing added for tourists. You can buy fruit, fish and everything else you could want accompanied by much Italian gesticulation and gossip.

I Lungarni
This strange word means “Along the Arno” and is used in both Pisa and Florence to refer to roads running along the river. In both places it is a joy to wander along the river and admire the many beautiful mansion houses from the 14th century and later.

Palazzo Gambacorti
If you had to select one of the mansion houses along the Arno above others, it would have to be Palazzo Gambacorti – one of the town’s most impressive Gothic constructions built by Pietro Gambacorti between 1370 and 1380. The poor man did not enjoy his beautiful house for long as he was murdered on the doorstep of the house in 1392. Today the mansion is home to Pisa’s town hall. The entrance to the town hall is from via Toselli where the building has a facade dating back to the 1600s.

Orto Botanico (Mon-Fri 8:00-12:30 and 14:00-17:00)
Pisa can boast of having Europe’s oldest botanic garden. It was established in 1544 by Luca Ghini with the aim of collecting plants that could be used medicinally in teaching and research. The first botanic garden was further down towards the Arno but had to move to make room for an extension of the large arsenale to build the many ships for the knights of Saint Steven. For some years the garden moved to the other end of town in Porta Calcesana but in 1591 it moved again and found a permanent resting place close to the cathedral.

Corso Italia - Borgo Stretto - Via G. Oberdan
These streets make up the main street in Pisa, if there is such a thing in such a labyrinthine town. Here you can find many of the town’s best shops and also some charming cafés where you can enjoy a cup of coffee or something stronger.

Cassa di Risparmio di Pisa
Pisa’s savings bank (via Ulisse Dini) is in this wonderful medieval mansion house, whose facade is adorned with two enormous Romanesque capitals, probably from the villa owned by the Emperor Hadrian close to the town.