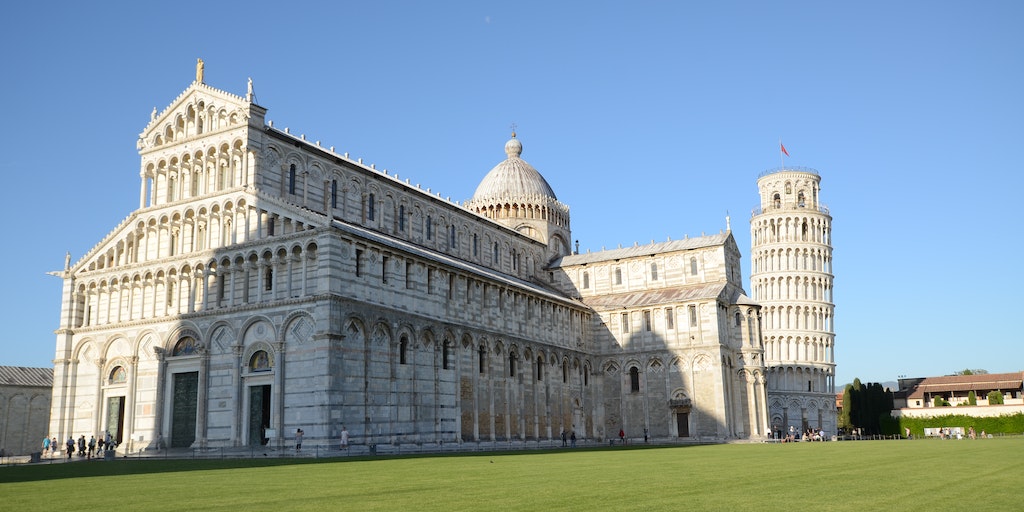 Loading content
As you walk around Pisa you may be struck by the fact that there are many more churches from the Romanesque period (approx. 1000-1300) than there are in both Florence and Siena. This is a clear testimony to Pisa’s greatness during this period.

As you walk around Pisa you may be struck by the fact that there are many more churches from the Romanesque period (approx. 1000-1300) than there are in both Florence and Siena. This is a clear testimony to Pisa’s greatness during this period. Many churches were built in these years while many others were renovated and rebuilt. The Romanesque style with its round arches and vaulted roofs, small high windows and harmonious features have a special Pisan version of the style (much copied in large parts of the rest of Tuscany and in Sardinia and Corsica). It is characterised by the interplay between white and black/grey stone in stripes and many small arcades high up on the facade.

The majority of these churches have since undergone many changes and rebuilding. Some of the original churches have almost disappeared while others are still present but mixed with other styles. Some 19th and 20th century restoration work actually attempted to recreate the original appearance of the churches.
Here we have selected “only” ten of the town’s many noteworthy churches. Unfortunately many of them are often closed to the public but that is the price you pay for Pisa not being overwhelmed by tourists.

San Zeno
This church is situated just outside the town centre in the old Romanesque town. The church was built by the Benedictines in the 900s, probably on the site of a heathen temple. San Zeno has been extended several times over the centuries but the facade is still as it was when it was founded. The church is most interesting from the outside where you can see the many levels of building work. However, if you are lucky enough to visit when the church is open you should note a lovely reuse of Romanesque capitals on some of the columns.

San Francesco
This church was founded in 1211 and extended in 1265-70. Its simple facade is from 1603. From the exterior the church appears to be nothing special but when you enter its sheer size is the most impressive feature. The church has a wealth of frescoes, especially from the 1300s, including Taddeo Gaddi, Noccolò di Pietro Gerini and not least Taddeo di Bartolo whose other famous works include Judgement Day in the diocesan church in San Gimignano. Wood carvings and marble sculptures from many periods can be found in abundance here.


For those interested in Dante the church holds a special attraction: Count Ugolino and his sons were buried here and can be found in the first chapel on the right hand side. In the floor is a plaque with the inscription TVUMBA COMITIS VGOLINI.


San Niccola
The church of Saint Nicholas is one of those churches which were built early on but later rebuilt and extended many times. The church is first mentioned in 1097 but we know that it underwent major changes between the 13th and 14th centuries followed by a drastic rebuilding towards the end of the 16th century and that it was further “beautified” in the 18th and 19th centuries. It is almost sport to identify the various phases in the present form of the church. The characteristic, and slightly askew, campanile is from the middle of the 13th century and has been attributed to Nicola Pisano who is also the architect of the pulpit in the baptism chapel on Piazza dei Miracoli. Notice how the tower’s shape changes from round to octagonal.

San Michele in Borgo
This beautiful church is in the centre of the town’s main street, Borgo Stretto. It was founded around 1000 AD by Benedictines but the church’s current appearance is shaped by later changes. The facade which was created around 1300 is a text book example of the transitional phase from Romanesque to Gothic style. The lower part is characterised by Romanesque round arches while the upper part has Gothic sharp arches on the small arcades

The church was badly damaged during the Second World War. Although it has been beautifully restored, all its frescoes have been destroyed. An added bonus of the restoration work is the graffiti that you can see on the facade. This is election propaganda from university elections for vice chancellor in the 15th and 16th centuries. At this time the students elected the vice chancellor and this church was reserved for the university.

San Sisto
It is interesting to note that although this church is thought to have been founded in 1087, a few years after the cathedral, there are no architectural connections between the two. San Sisto is simple in both form and building materials. Like many other churches, it has suffered Baroque “embellishments”, but during the last century the indefatigable parish priest has tried to change the interior of the church back to its original appearance. Today the interior of the church appears almost bare, covered by the traditional Romanesque roof construction.

Also note how the facade and the left side of the church are embellished by glazed ceramic bowls. The technique of glazing ceramics was taught to the Pisans by the Arabs and use of these bowls as decoration is typical for Pisan churches from the Middle Ages. Most of the bowls are copies and this is also the case here. The originals are in the Museo di San Marco.

San Paolo a Ripa d'Arno
There was already a church on this site in 805 but the current church was started shortly after 1000. Building work took time and it wasn’t until 1149 that the church was consecrated by pope Eugenius III. The exterior decoration was not finished until the middle of the 1200s. The cathedral is thought to have been modeled on this church, which is understandable if you consider the western side with the transept. The church space has three aisles separated by granite columns from Elba, crowned by beautiful Romanesque capitals. The church’s interesting contents include a Roman sarcophagus which was reused for a Pisan lawyer at the end of the 1100s and a painting of the Madonna with Child and Saints from the 14th century.

The little chapel, Capella di S. Agata, which is behind the apse, has a special history. Saint Agata is a Sicilian saint and legend has it that the chapel in her honour was built in 1063 following a victory by the Pisans over the Arabs at Palermo. The building has an octagonal ground plan and an octagonal roof and is reminiscent of San Sepolcro indicating that they were both built by the same architect.  The chapel has traces of frescoes probably from the 1100s.

Santa Maria della Spina
Originally the church was just a little chapel named Santa Maria del Ponte Nuovo erected for the purpose of protecting the bridge over the river built by a consortium of important families. Of course, the families did not build the bridge for the sake of their neighbours: it was a private bridge and those crossing had to pay. This little business didn’t last very many years as the bridge was torn away by the strong current.


Between the years 1325 and 1376 the church was rebuilt from top to bottom and in 1343 it changed its name when it received the magnificent relic of a thorn from the crown of Jesus. The church’s characteristic gothic decoration is eye catching and you can spend a long time marvelling at the details. Before 1871 the church was even closer to the Arno but fear of its destruction as a consequence of flooding led to it being dismantled stone by stone and rebuilt on its current site.

Santa Caterina d'Alessandria
Since the mid 13th century when it was founded, this church has been home to the Dominicans. The facade which was first finished at the start of the 14th century is marked by the interplay between the white and grey/black stone so typical of Pisan-Romanesque architecture. This church will give you an idea of the timeframe involved in church building as the lower part of the facade is Romanesque while the upper part is Gothic!


As you would expect in the Dominicans’ (and Franciscans’) priory churches there is just one large aisle in the church, allowing more space for the large congregations who attended the services of these monastic orders. Among the many art treasures in the church are a marble sarcophagus above the Archbishop Simone Saltarelli by Nino Pisano, a magnificent Annunciation in marble by the same artist and the chair from which Saint Thomas Aquinas is said to have held his Pisan lectures.

Also note the elegant bell tower in stone with its glazed ceramic bowls. This bell tower is from the middle of the 13th century and two of its three bells date back to the 14th century.

San Sepolcro
This strange church was mentioned for the first time in a document from 1138. It is a copy of the Church of the Holy Sepulchre in Jerusalem, with an octagonal floor plan and the alter placed in the centre. The northern and southern entrances have beautiful animal motifs from the 12th century. Inside the church there is a beautiful tablet depicting the Madonna with Child by the Florentine Benozzo Gozzoli from the 1460s. Also noteworthy are the many epitaphs in the church floor, including Maria Mancini Colonna, the niece of cardinal Mazarin and the lover of Louis XIV of France, the Sun King.

The bell tower is a massive robust construction in brick and stone. For once there is no doubt as to the identity of the architect because it is carved in marble at the bottom of the tower:
HVIUS OPERIS FABRICATOR DEVS TE SALVET NOMINATVS
“The creator of this work is named Diotesalvi” - also the man behind the baptism chapel at Piazza dei Miracoli

San Piero a Grado
If you arrive in town by car, it is worth leaving the town and driving past San Piero a Grado to see the church of the same name, Basilica di San Piero a Grado. Catholics claim that Saint Peter disembarked here when he sailed over the Aegean Sea to Italy. The basilica was built in the 11th century on the remains of a heathen temple and is a lovely example of Romanesque architecture in Pisa built in tuff-stone and marble.