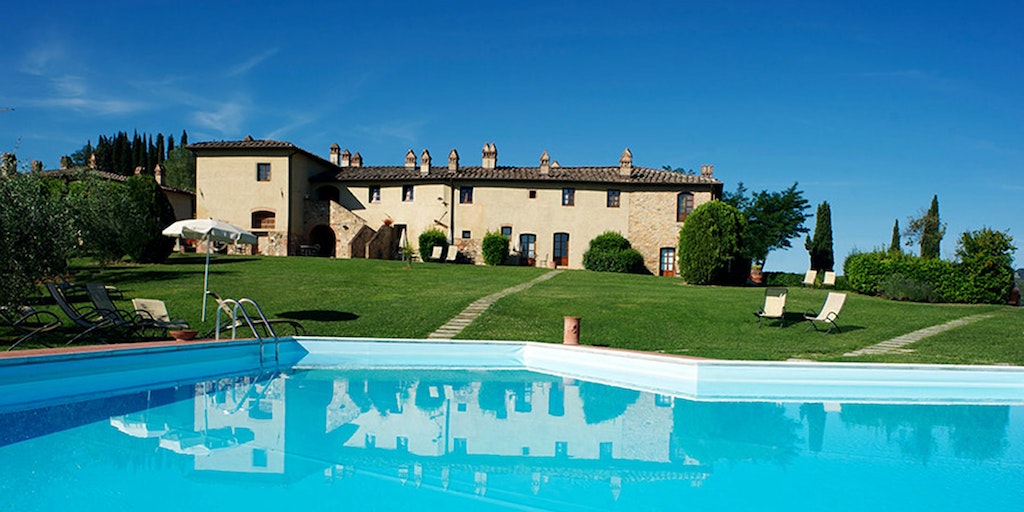 Read personal reviews of Fattorie Santo Pietro in in Chianti wine district. The reviews of the agriturismo are written by guests who have travelled with In-Italia. All reviews are of course uncensored in order for you to get an honest description and review of Fattorie Santo Pietro. In addition to the review of the agriturismo you can even get good tips from our guests on subjects such as day trips, restaurants, sights, beaches, local transportation and much more.

San Gimignano as a holiday destination

Lovely peaceful place, suitable size and with the most fantastic view. Friendly and service minded hosts. Lovely spacious apartment at the first floor and with dining area outside with a view. The apartment buildings is by the garden, and it is very peaceful. Big garden with a good pool, garden recliners, parasols and opportunity for shade under the trees, - and room enough for everyone. Only downside was, that the place restaurant in the main building had really boring food, so we only visited it on our day of arrival.
You can buy wine and olive oil of the place's own production.

San Gimignano as a holiday destination

The place is in the middle of Tuscany's heart, and there are great opportunities for excursions to San Gimignano - of course -, but also Sienna and Volterra are definitely worth a visit.
We didn't really find any restaurants nearby, but drove around 6 km. to Sam Gimignano, where there are lots of restaurants with different prices, - and very lovely also in the evening. Good opportunities for shopping in for example Certaldo (ca. 6 km.), which has a big COOP, where we amongst other things bought fresh fish and shellfish.
It pays to buy leather bags, which is a good quality, and around ½ the price it is in Denmark.

After an ice-cold reception, the owners hurried to open the doors and say goodbye. We understood why, when we say how filthy, the place is and quickly noticed the air smelled moist, uninhabited country house. The air condition was leaking water, and we couldn't open the windows. They said, that they would repair it as quickly as possible. We are still waiting!

Wash the bathroom, if you need to use warm water with some pressure! Disgusting shower curtain.

It was only the view and pool, that stopped us from leaving immediately

Many, many mosquitos, so don't expect to eat outdoors, unless you are dressed like a bee-keeper.

Thanks to the owners for saddening our mood and showing us, how the apparently do business.

The review is translated from French. Click to view the original

Lovely area - expensive for the price

We had a lovely week at the place. It lies in a lovely area, close to San Gimignano, and fine driving distance from Siena and Florence.
Lovely pool area where you use the most of the day, if you aren't out on a trip, with a fantastic view and sun till 8 pm. It isn't suitable for small kids, however, since the pool is the same depth at all ends.
There wasn't enough sunbeds. People placed their towels at 7 in the morning and let them stay, even thought they were away during the day.

The apartments were pretty disappointing. A bit poorly decorated with small closets and no place to place your stuff and the kitchen was VERY poorly equipped. No wine glasses (and it is a vineyard), no sharp knives, no pot lids, and it was generally very random what you would find in the drawers. We had a skimmer, a small grater, a potato peeler, and soup spoon, and a nutcracker! We were luckily 2 families, so we found something in one apartment and something else in the other. All had to be bought, from detergent , toilet paper, and salt and pepper. No dish towels or rags.

We ate at the place on the first day, and it was a lovely dinner with 3 delicious dishes. Their own wines are also sold cheap. The last day, Friday, we also ate there, and it was a whole different story. Some boring bruschetta with mayonnaise for starter, dry barbecue meat that was totally burned, a small plate of potatoes and a bowl of salad, with came 1/2 hour after the meat. Also very poor service. They did apologize for the service, but commented that there wasn't enough food for us 7. It seemed that they didn't really care because it was the last night.

We ordered air conditioning on the second day, since it isn't, as it otherwise is described, old, thick walls, but newly built, think stone walls, where the temperature easily gets over 100 degrees inside.
We were in the belief that it was included in the price as it is in the description of the place but we discovered, while travelling, evidence that something is paid separately on site for 50 €. When we discovered it only worked in the kitchen, which also leaks a fair bit of water water, we drove up to the front desk who believe they can fix it, but will try the next day. They say it's for all occasions and it is due that It's too hot that they can not with keep up (One must assume that it is the one aircon can cool during extreme heat).
Two days after the work is still not that we are five days. And thinking it's better than nothing, and must assume that they are aware of it, and thus no charges for aircon.
When we have to pay, they claim that they have the fix that and it was only one day it did not work and will have the full price for it. We talk to some Dutch people who stood by, saying they had the same problem. She who accepts payment refuses, however, that it should not have worked out and say we should have asked them to turn off. Now we are fortunately stubborn people and ended up with not paying, but it was not with favor from them.
All in all I think it is a wonderful place, but it is definitely too expensive! It is about 1450 DDK a day with no air condition and you get the basic apartment with boring decoration and without proper kitchen equipment.

If you like brands you can go to the mall by Reggio, where all the bigger brands can be found for about 1/2 price.

The review is written in Swedish. Click to view the original

We had a great stay at Santo Pietro. We had great weather and enjoyed the pool very much plus we had the experience of see how they harvest their olives and grapes. Unfortunately the TV is without connection and no Wifi, so it can be a bit boring if the weather is bad. But overall a good experience

The review is written in Norwegian. Click to view the original