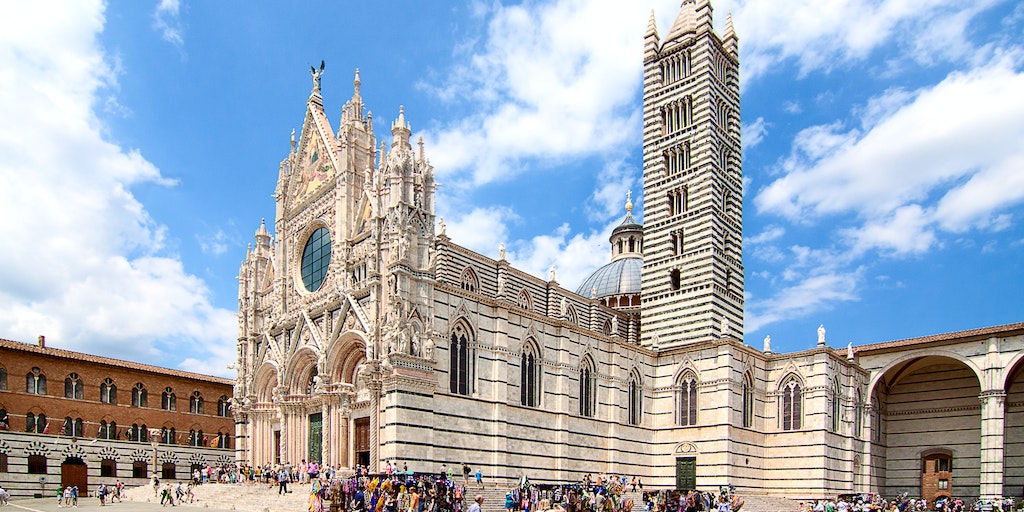 Loading content
There are two types of people: those who prefer Florence and those who love Siena. The preference is purely personal and a matter of taste. If you like modern cities with traces of the old, you should choose Florence. If you enjoy cities which are more coherent in style and have an air of the magical sleep of Sleeping Beauty then you should go to Siena.

Siena is unique, harmonious and incredibly beautiful. Today it is a medium-sized provincial town with 60,000 inhabitants, but once it was one of the great powers of the western world, which for a long time was at war with Florence for rule of Tuscany. Siena lost that battle and that is why development has almost stood still in the town. The town still looks largely as it did in the 14th century and its inhabitants have retained their identity, not as Italian or Tuscan but as Sienese. At sporting events against Florence you can still hear the cry “Remember Montaperti” a reference to the ignominious defeat suffered by the Florentines at the hands of the Sienese in 1260.

It is impossible to capture the magical essence of Siena in prose but if you want to try and understand the city, then there is no better time than the summer months. Siena is divided into 17 town areas called contrade. These town areas function as independent states: each has its own flag, government and celebrations. All have an animal as its symbol and each area has its friends and foes among the others. The caterpillar cannot stand the giraffe, the she-wolf despises the porcupine and so on.

An outsider will not grasp quite how deep this feeling runs, before he has experienced the town in the days around Il Palio (2nd July to 16th August). During this time the town areas compete to win a strange horse race on the town’s magnificent shell-like square, Piazza del Campo. This event involves bare-back riders trying to be the first to reach the target following four rounds of the square. It costs the participating town areas a small fortune and the only thing they can win is a banner. But it is a matter of honour, and the Sienese live out this event as if it were a matter of life or death.

Siena is a town which requires more than the half or a whole day so many people allocate it. If this is all the time you allow, you will only experience a small part of its attractions and will not be able to fully appreciate the charm of the town. Although having said this, you should be careful because Siena can get into your blood. Many have been know to become addicted to its charms and suffer withdrawal symptoms if there is too long between visits!